As a result of a collaboration in the context of the EC-FP7 program OCEAN 2013, NANBIOSIS Unit 2 Custom Antibody Service (CAbS) and  Unit 4. Biodeposition and Biodetection,  the research groups coordinating this NANBIOSIS Units have recently published an article titled “Interferometric nanoimmunosensor for label-free and real-time monitoring of Irgarol 1051 in seawater” in the scientific magzine  iosensors and Bioelectronics.

The CIBER-BBN-ICN2 group  Nanobiosensors and Bioanalytical Applications, led by Prof. Laura Lechuga has developed the immunosensor that is described in the article using immunoreactive, produced in the group of  Nanobiotechnology for Diagnostics Group (Nb4D), led by Prof. Pilar Marco, with the collaboration of CAbS, for Irgarol 1051. This compound is an alguicide used as an additive in the paintings of ships. Over time, the compose is being released  into the marine environment causing a risk to the ecosystem and to the health of the population.

In the article, an interferometric nanobiosensor for the specific and label-free detection of the pollutant Irgarol 1051 directly in seawater has been settled. Due to the low molecular weight of Irgarol pollutant and its expected low concentration in seawater, the sensor is based on a competitive inhibition immunoassay. Parameters as surface biofunctionalization, concentration of the selective antibody and regeneration conditions have been carefully evaluated. The optimized immunosensor shows a limit of detection of only 3 ng/L, well below the 16 ng/L set by the EU as the maximum allowable concentration in seawater. It can properly operate during 30 assay-regeneration cycles using the same sensor biosurface and with a time-to-result of only 20 min for each cycle. Moreover, the interferometric nanosensor is able to directly detect low concentrations of Irgarol 1051 in seawater without requiring sample pre-treatments and without showing any background signal due to sea matrix effect. 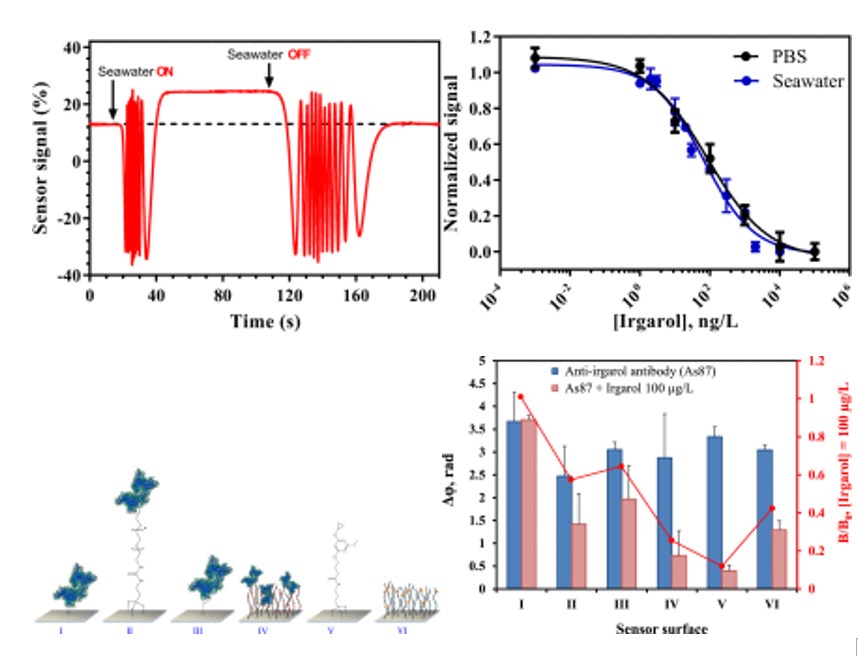