During the last 27-29 April, the 3rd International Conference on Nanomaterials Applied to Life Sciences 2022 (NALS 2022) has taken place in the Excellence Campus of Universidad de Cantabria in Santander (Spain), organized by the University of Cantabria and Institute Valdecilla-IDIVAL.

NANBIOSIS has been represented at this edition by members of several of its units, among them we must highlight the set of four oral communication presented by members of the Nanobiotechnology group-Unit 1 of NANBIOSIS “Protein Production Platform (PPP)”, from CIBER-BBN and IIB-UAB the talks were delivered by:

Jan Atienza-Garriga: “Characterization of protein-only NPs containing amps and analysis of their protection with liposomes and micelles”

They summarized a wide area of the team activities on the design of protein-based protein materials for clinical uses, produced by means of diverse types of cell factories. In particular, antimicrobial peptides, cytotoxic proteins with antitumoral targeting and drug-carrying scaffold proteins are engineered to confer self-assembling properties as either microparticles or nanoparticles, that can be further functionalized with chemical drugs through covalent binding. Microparticles are of special interest as they can be used as slow drug delivery systems for nanostructured drugs upon subcutaneous administration. Alternatively, nanoparticles can be also presented as embedded in liposomes or other micellar structures that stabilize them for enhanced performance.

Among all the excellent contributions by the team, it is worthy to stress that the prize for the best Oral Presentation was granted to Dr Eloi Parladé.

Other talk by researchers from NANBIOSIS were “Antioxidant-loaded polymeric NPs prepared by nano-emulsion templating for the management of neurological diseases” by Santiago Grijalvo, from NANBIOSIS U12 and  “Exploiting GSH oxidation with nanocatalysts to promote cancer cell death” by Javier Bonet-Aletá from NANBIOSIS U9

On the other hand, Jesús Santamaría,  Scientific Director of NANBIOSIS U9 was a Keynote Speaker in the Conference with the talk: “A change of paradigm in cancer therapy? Using catalysts to make drugs inside the tumor, rather than trying systemic chemotherapy”

NALS 2022 has been an excellent conference, with presentations covering a wide range of topics in nanomaterials for health, and a great opportunity for our researchers, especially for young’s, to let know their collaborative work, as well as make new connections on common research interests, thanks to the good socializing opportunities afforded by the scheduling of the organization conference. 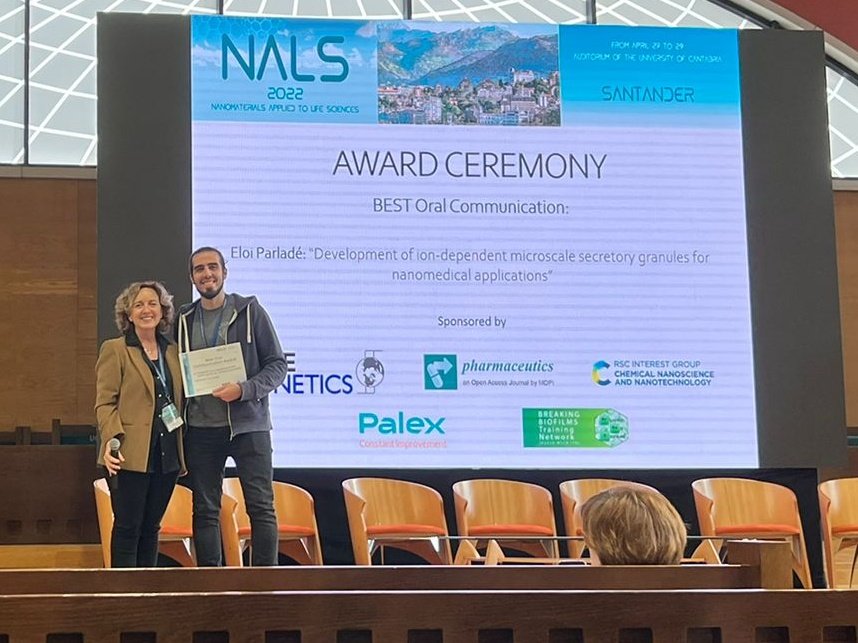 The Nanotoxicology Unit of CIBER-BBN ICTS NANBIOSIS, leaded by Ramon Mangues at the Research Institute of the Hospital de Sant Pau is devoted to evaluate effectiveness and toxicity of novel nanoparticles.  This Unit advises clients on the need to study simultaneously anticancer activity and associated toxicity. Thus, preclinical evaluation of novel Nanomedicines is usually carried out performing studies that assess their therapeutic effect, separated from additional experiments devoted to evaluate the toxicity associated with treatment. The dosage used to assess the therapeutic effect, often, significantly differs from the one used to study toxicity, since one is aiming to know the biodistribution of the nanoparticle and whether it is able to control cancer growth, whereas the other tries to identify the maximal tolerated dosage that can be achieved without conferring severe toxicity or lethality.

However, to maximize the effectiveness of novel nanoparticles in the preclinical assessment and their subsequent clinical translation it is important to consider a crucial point of divergence between nanomedicines and classical low molecular weight drugs.

On the one hand, lipophilic small drug bidodistribute by passive diffusion, reaching similar concentration in tumor and non-tumor tissues. Besides, they display a steep dose/effect curve, so that higher doses reach higher anticancer effect (e.g. genotoxic drugs, such as 5-fluorouracil or cisplatin). Nevertheless, this increased effect, obtained intensifying the drug dosage, is achieved at the expense of higher toxicity, that is also dose dependent. In contrast, this situation differs in the case of nanomedicines that use targeted drug delivery, which are capable of selectively concentrating the payload drug delivered by the nanocarrier in target cancer cells, leading to an enhanced uptake in tumor tissue. This effect makes it unnecessary and inefficient to increase the nanomedicine dosage over the one that effectively kill target cells, while maintaining low the associated toxicity. This is because nanomedicines that exploit targeted drug delivery do not have a dose dependent increase in antitumor activity; whereas if administered at high dosage they lose selectivity in their delivery, triggering off-target toxicity, that is likely to be dose-dependent. Thus, increasing the dosage of targeted nanoparticles may increase off-target effects without increasing anticancer effectiveness. In this regard, administering a dosage higher than the one that reaches optimal therapeutic effect can only lead to unspecific internalization in non-target cells and subsequent toxicity.

Therefore, it is our opinion that the evaluation of the tumor and non-tumor tissues biodistribution and the assessment of the therapeutic effect is more informative if at the same time and in the same model is tested the associated toxicity. The testing of various dosage levels will determine which of the evaluated dosage achieves the highest therapeutic window, that is, the one that achieves effective cancer cell killing and optimal antitumor activity without associated toxicity, and the one for which an additional increase in dosage will not improve further the antitumor effect, while increasing instead its toxicity 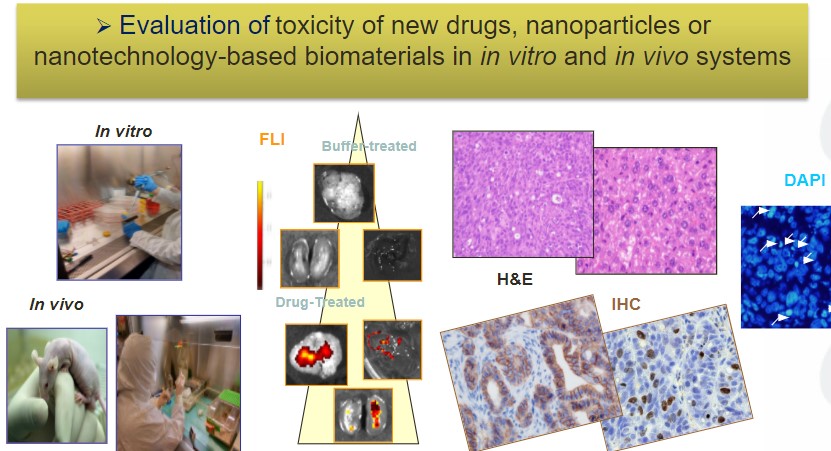 NANBIOSIS has participated in the organization of the on-line Conference on Nanotoxicity in collaboration with, CIBER-BBN, Nanomed Spain and Materplat, to debate about the efect of nanotoxicity of nanoparticles and nanotechnologies in health.

The session has been started by Ramon Martinez Mañez, Scientific Director of CIBER-BBN and NANBIOSIS U26 NMR: Biomedical Applications II.

Isabel Rodriguez (GAIKER Technlogy Center) has taking about tools for risk management of nanomatials differentiating between tools and strategies and explaining their experience in studies carried out.

Ariel Ramírez from the Nanotoxicology Unit of the Aragon Health Research Institute (IIS Aragón) has spoken about preclinical characterization of micro and nanoplastics.

Finally, Ciro Luis Salcines from the University of Cantabria spoke about the practical application of NanoPrevention and Nanotoxicology.

The talks have been followed by a round table of great scientific interest. Ernesto Caballero Garrido, from the Spanish Agency for Medicines and Health Products (AEMPS) has shown that sometimes the evaluation of “nano” goes through the evaluation of “macro”, as there is a lack of specific regulation, in this case the two additional aspects to be taken into account to determine nanotoxicity are accumulation and elimination.

Ramón Martínez Mañez closed the session thanking the organization of the Conference and inviting to continue with these Annual Conference on Nanotoxicity, a topic of great interest to the CIBER-BBN

The Conference was moderated by Teresa Sanchis, executive coordinator of Nanomed. 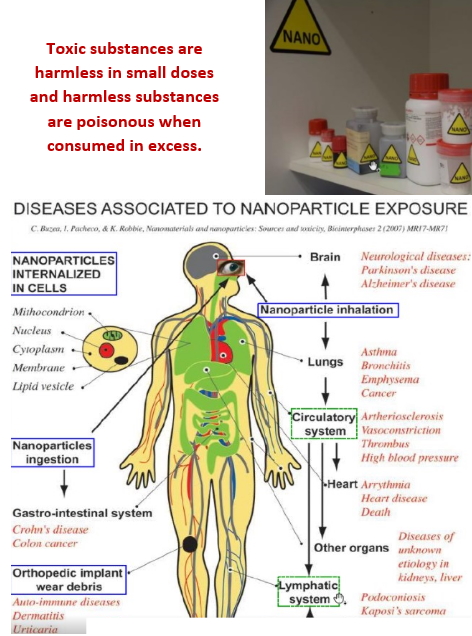 Nanoparticle uptake and in vivo estimates of therapeutic efect and toxicity

Ramón Mangues, Scientific Dierctor of unit 18 of NANBIOSIS, Unit of nanotoxicology, explains in this video some of the animal models used in the unit for preclinical validation of nanoparticles, especially of application in cancer

Conference on Nanotoxicity, next May 24, Parc Scientific of Barcelona

NANBIOSIS is organizing a Conference on Nanotoxicity in collaboration with Nanomed Spain and Materplat, next May 24 in the Parc Scientific of Barcelona, to debate about the efect of nanotoxicity of nanoparticles and nanotechnologies in health.

The increase of potential risks to health has created the new discipline of nanotoxicity, that is, the study of the toxicity produced by the effect of nanoparticles and nanomaterials. The objective of this day is to learn more about the lines that are being followed by researchers in the area of ​​nanotoxicity, the progress of different projects in this field, as well as existing tools to know and reduce the toxicity of nanoparticles and nanomaterials.

Nanotechnology intervenes in the design, production and use of structures and objects that have at least one of its dimensions in the scale of 100 nanometers or less. This science is allowing the achievement of advances in various areas with great repercussions for society.

However, manufactured nanoparticles can have properties and effects very different from those of the same materials in conventional sizes, which may pose new risks to the health of man and other species. Some nanoparticles, which are used as a vehicle for drugs to reach the desired cells in greater quantities, to reduce the side effects of the drug in other organs or both, have the same dimensions as certain biological molecules and can interact with them.

The increase of potential risks to health has created a new discipline, nanotoxicity, that is, the study of the toxicity produced by the effect of nanoparticles and nanomaterials. The objective of this day is to learn more about the lines that are being followed in research in the area of ​​nanotoxicity, the progress of different projects in this field, as well as existing tools to know and reduce the toxicity of nanoparticles and nanomaterials.

The event will count with the presentations of Jesús Izco, Executive Director of NANBIOSIS, Ibane Abasolo, Scientific Coordinator of NANBIOSIS U20 In Vivo Experimental Platform and Francisco Balas,Scientists of NANBIOSIS U09 Synthesis of Nanoparticles Unit

The assistance is free but it is necessary to register.
For further information, agenda and registration click here