Researchers from NANBIOSIS U18 Nanotoxicology Unit at the Institut d’Investigació Biomèdica de Sant Pau (IIB Sant Pau) and NANBIOSIS U1 Protein Production Platform (PPP) at the Universitat Autònoma de Barcelona (UAB) toghether with researchers of Institut de Recerca contra la Leucèmia Josep Carreras (IJC) have demonstrated the efficacy of a new nanoconjugate, designed in house, that blocks dissemination of leukemic cells in animal models of acute myeloid leukemia. These results have been published in a high impact scientific journal in the field of oncology and hematology, Journal of Hematology and Oncology. Most of the experimental work has been performed in the nanotoxicology and protein production ICTS “NANBIOSIS” platforms from CIBER-BBN.

NANBIOSIS U1 PPP has advised and helped the researchers in the production of recombinant proteins, which has allowed to successfully explore the capacity of proteins from the human microbiome, that is, from bacteria and their bacteriogages, to generate, through genetic engineering, biocompatible nanomaterials and Non-immunogenic for potential use in human clinics, such as vehicles for drug delivery or regenerative medicine.

Acute myeloid leukemia (AML) is a heterogeneous disease which usual treatment is very aggressive and produces severe side effects to the patients. In order to reduce these adverse effects, the researchers have developed a nanomedicine that is specifically targeted to the tumor cells without damaging normal cells. This new protein nanoparticle is bound to a toxin, named Auristatin, which is between 10 and 100 times more potent than the drugs typically used in the clinic. In particular, this nanoconjugate is targeted only to the cells that express in their membrane a receptor called CXCR4, which is overexpressed in leukemic cells. Thus, this nanoparticle can only enter and deliver the toxin into the cells that express this receptor. It should be noted that CXCR4 is overexpressed in a large proportion of leukemic cells in patients with poor prognostic or refractory disease, so it could have a major clinical impact on these AML patients.

The researcher team led by Ramon Mangues, from IIB Sant Pau, Antonio Villaverde and Esther Vázquez, from UAB, all members of CIBER-BBN, has demonstrated that the nanoconjugate is able to internalize in the leukemic cells through the CXCR4 receptor and kill them. In addition, they have demonstrated the capacity of this nanoparticle to block dissemination of leukemic cells in a mouse model producing without any kind of associated toxicity or adverse effects. Thanks to its targeting to leukemic cells it could help AML patients that cannot be treated with current drugs because of their high toxicity, such as this experienced by elderly patients or patients with other non-favorable characteristics that exclude conventional treatment. Furthermore, the novel nanoparticle could be used to treat patients that have developed resistance to drugs or those that have experienced relapse, since their leukemic cells would likely have high expression of the CXCR4 receptor. Hence, there is a wide range of patients that could benefit of this new treatment, which could have  a major clinical impact if its effectiveness was confirmed in further clinical trials.

It is worth pointing out that the CXCR4 receptor is overexpressed in more than 20 different cancer types, which expression associates with poor prognosis. Therefore, this nanodrug could be evaluated in the near future as a possible treatment in other tumor types of high prevalence.

The intellectual property of this nanomedicine has been licensed to the SME biotech Nanoligent, which aim is continuing the so far successful access to public and private funds to complete the preclinical development to enter clinical trials in acute myeloid leukemia, before being tested in other cancer types. 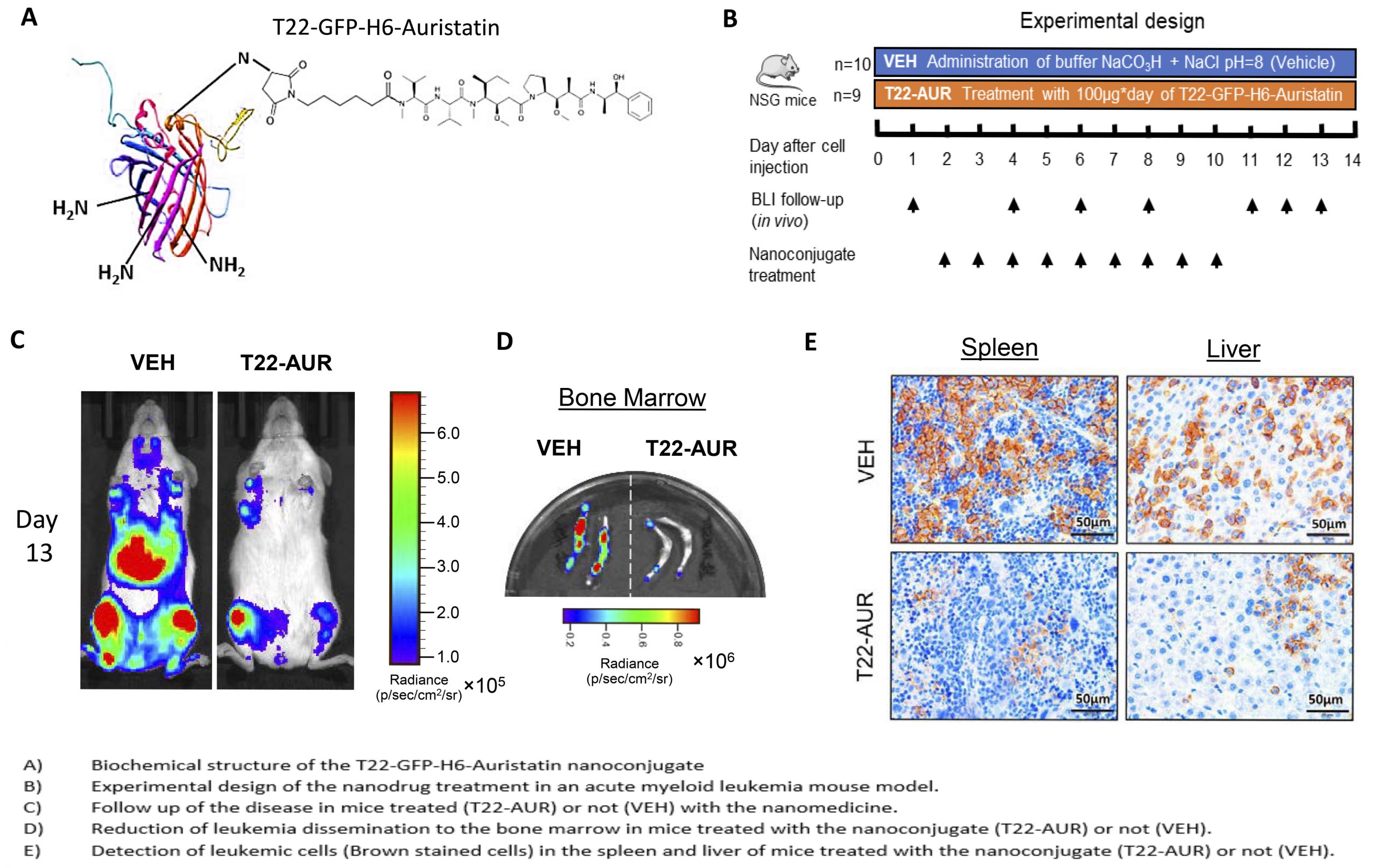 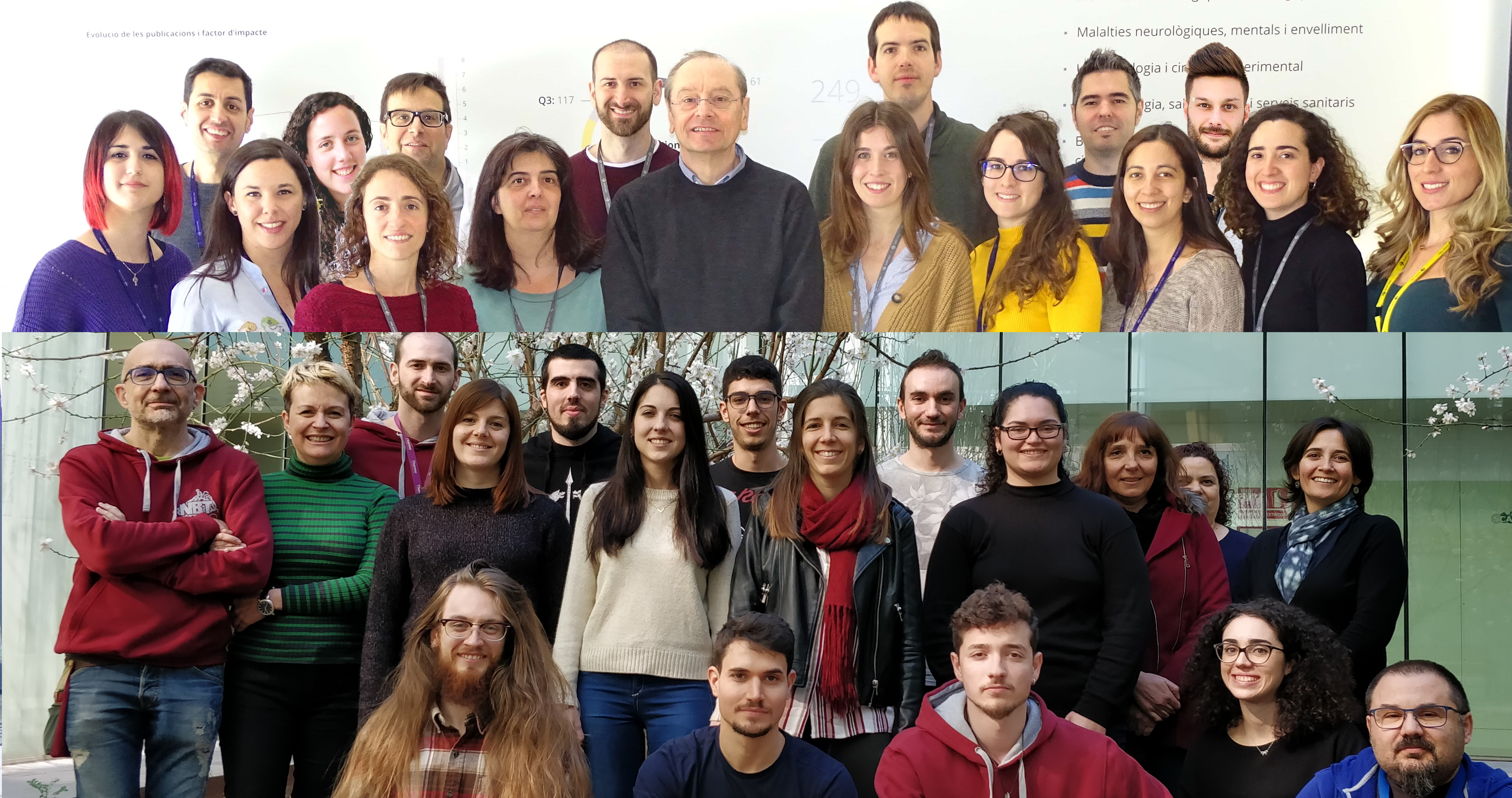 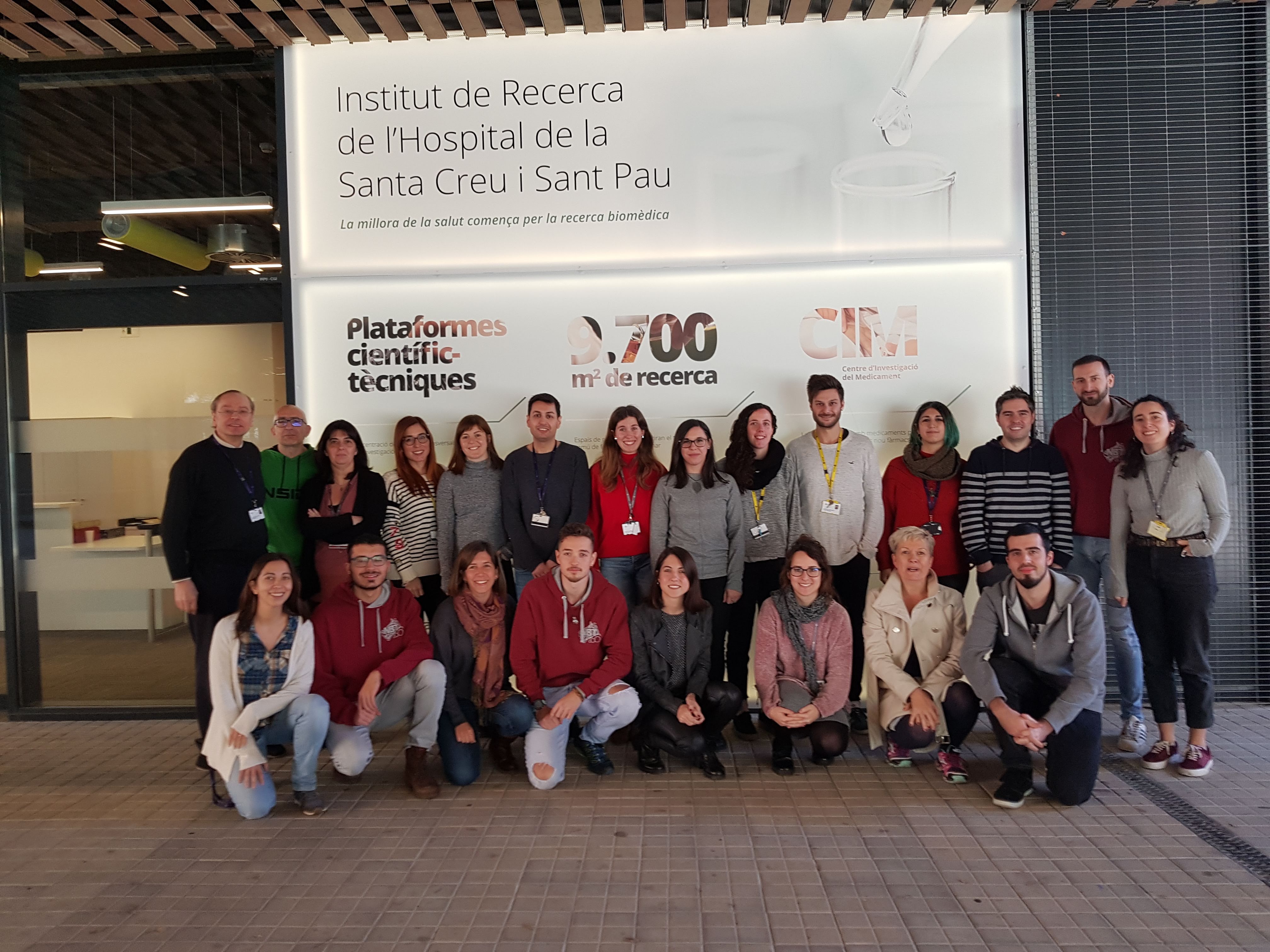 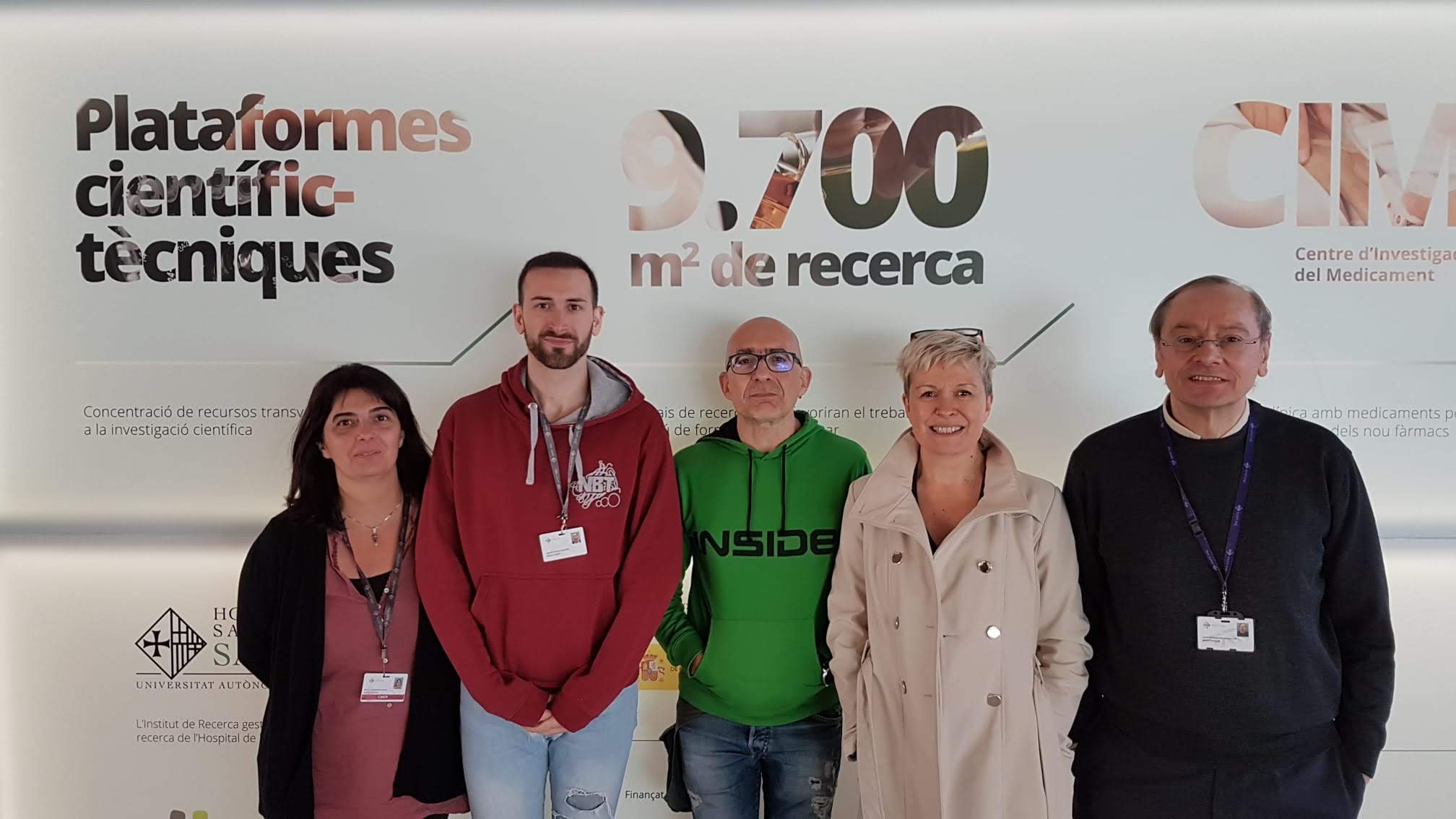 “Selectively humanized nanomedicines aimed at killing CXCR4 + tumor cells for the treatment of acute myeloid leukemia”  is one of the Project awarded by La Marató TV3 Foundation and is participated by Dr. Antonio Villaverde, Estrategic of NANBIOSIS U1 Protein Production Platform (PPP)

The main objective of the project is the design and validation of humanized protein nanoparticles for the targeted delivery of antitumoral drugs for the treatment of acute myeloid leukemia. This will be done by the generation of protein-based nanoconjugates that will be targeted to the cytokine receptor CXCR4, overexpressed in this human neoplasia. The drugs will consist in a protein part, that will ofer nanoscale size, stability and CXCR4-targeting, and a small molecular weight chemical that will perform the cytotoxic effect over tumoral cells. The Protein Production Platform (U1 of NANBIOSIS), will have a critical role in the design and production of the protein amounts required for the in vivo experiments, that will be performed at the Institut de Recerca of Sant Pau Hospital.

In the 2018 La Marató TV3 edition, dedicated to cancer, 192 projects were presented, which were evaluated by 149 international scientists specialized in this field based on their quality, methodology and relevance. The management of the evaluation was carried out by the Health and Quality Assessment Agency of Catalonia, from the Department of Health. In accordance with the proposal of the Scientific Advisory Commission of the La Marató de TV3 Foundation, the Board agreed to distribute 13,149,870.76€ among the 43 scientific research projects.

The Project “Selectively humanized nanomedicines aimed at killing CXCR4 + tumor cells for the treatment of acute myeloid leukemia“. Will be developed by the research groups led by:

Under the unmet need of efficient tumor‐targeting drugs for oncology, a recombinant version of the plant toxin ricin (the modular protein T22‐mRTA‐H6) is engineered to self‐assemble as protein‐only, CXCR4‐targeted nanoparticles. The soluble version of the construct self‐organizes as regular 11 nm planar entities that are highly cytotoxic in cultured CXCR4+ cancer cells upon short time exposure, with a determined IC50 in the nanomolar order of magnitude. The chemical inhibition of CXCR4 binding sites in exposed cells results in a dramatic reduction of the cytotoxic potency, proving the receptor‐dependent mechanism of cytotoxicity. The insoluble version of T22‐mRTA‐H6 is, contrarily, moderately active, indicating that free, nanostructured protein is the optimal drug form. In animal models of acute myeloid leukemia, T22‐mRTA‐H6 nanoparticles show an impressive and highly selective therapeutic effect, dramatically reducing the leukemia cells affectation of clinically relevant organs. Functionalized T22‐mRTA‐H6 nanoparticles are then promising prototypes of chemically homogeneous, highly potent antitumor nanostructured toxins for precise oncotherapies based on self‐mediated intracellular drug delivery. 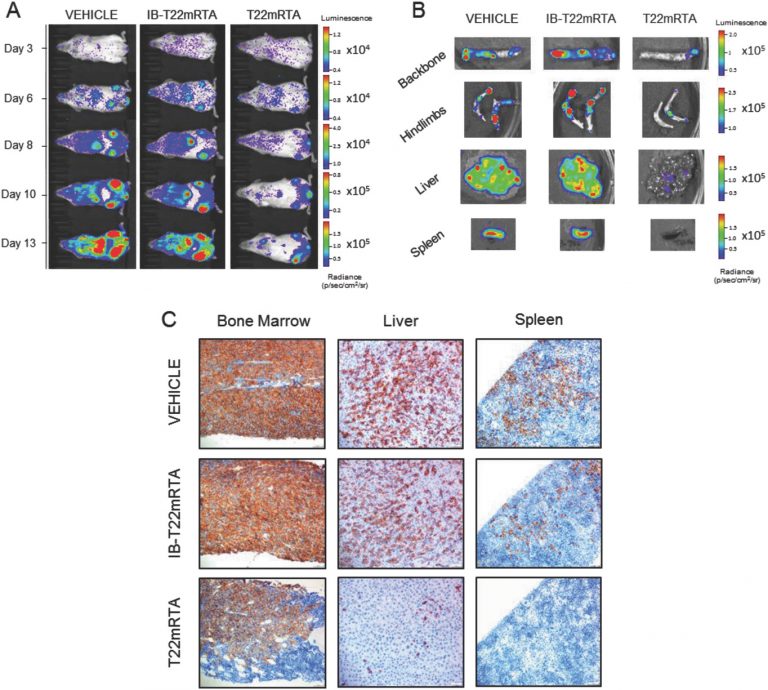 Scientists of Units 1 and 18 of NANBIOSIS are coathors of the article  “Switching cell penetrating and CXCR4-binding activities of nanoscale-organized arginine-rich peptides” published by Nanomedicine: Nanotechnology, Biology and Medicine

Arginine-rich protein motifs have been described as potent cell-penetrating peptides (CPPs) but also as rather specific ligands of the cell surface chemokine receptor CXCR4, involved in the infection by the human immunodeficiency virus (HIV).

Polyarginines are commonly used to functionalize nanoscale vehicles for gene therapy and drug delivery, aimed to enhance cell penetrability of the therapeutic cargo. However, under which conditions these peptides do act as either unspecific or specific ligands is unknown. The authors have here explored the cell penetrability of differently charged polyarginines in two alternative presentations, namely as unassembled fusion proteins or assembled in multimeric protein nanoparticles. By this, they have observed that arginine-rich peptides switch between receptor-mediated and receptor-independent mechanisms of cell penetration. The relative weight of these activities is determined by the electrostatic charge of the construct and the oligomerizationstatus of the nanoscale material, both regulatable by conventional protein engineering approaches

Protein production has been partially performed by the ICTS “NANBIOSIS”, more specifically by the U1. Protein Production Platform (PPP), whereas the in vivo biodistribution assays were performed in the NANBIOSIS U18. Nanotoxicology Unit,