29 of February is a ‘rare’ date and February, a month with a ‘rare’ number of days, has become a month to raise awareness about rare diseases and their impact on patients’ lives.  Since 2008 thousands of events happen every year all around the world and around the last day of February.

NanoMed Spain Platform and the Hospital of Sant Joan de Déu have organized the NanoRareDiseaseDay to present the latest innovations in the field of Nanomedicine for the treatment and diagnosis of rare diseases (diseases affecting less than 5 people per 10,000 inhabitants). Nora Ventosa, Scientific Director of NANBIOSIS U6 Biomaterial Processing and Nanostructuring Unit  (CIBER-BBN / ICMAB-CSIC) presented Smart4Fabry a European project with the aim of reducing the Fabry disease treatment cost and improve the life-quality of Fabry disease patients

Fabry disease is one of the rare diseases that currently lack a definitive cure. It is cause by lysosomal storage disorders (LSDs):  the deficiency of α-Galactosidase A (GLA) enzyme activity result in the cellular accumulation of neutral glycosphingolipids, leading to widespread vasculopathy with particular detriment to the kidneys, heart and central nervous system.

Smart-4-Fabry has been conceived to obtain a new nanoformulation of GLA, that will improve the efficacy and toleration compared to the actual treatment with non-formulated GLA. Four units of NANBIOSIS participate in the project:

– U1 Protein Production Platform (PPP) led by Neus Ferrer and Antony Villaverde at IBB-UAB accomplish the production and purification in different expression systems for R&D purposes.

– U3 Synthesis of Peptides Unit led by Miriam Royo at IQAC-CSIC performs all the chemical process of the Smart-4-Fabry  project, i.e. design and synthesis of peptides used as targeting ligands in the nanoliposome formulation

– U6 Biomaterial Processing and Nanostructuring Unit led by Nora Ventosa and Jaume Veciana at ICMAB-CSIC undertakes tasks related to the manufacture of the nanoliposome formulation of GLA enzyme and the physico-chemical characterization (this unit counts with plants at different scales, from mL to L, which allow process development by QbD and process scale-up, as well as instrumental techniques for assessment of particle size distribution, particle concentration, particle morphology and stability, and Z-potential)

– U20 In Vivo Experimental Platform led by Simó Schwartz and Ibane Abásolo at VHIR to carry out the non-GLP preclinical assays of the project (in vivo efficacy, biodistribution and tolerance/toxicity assays).

For further information about Fabry disease and the Smart4Fabry project: here 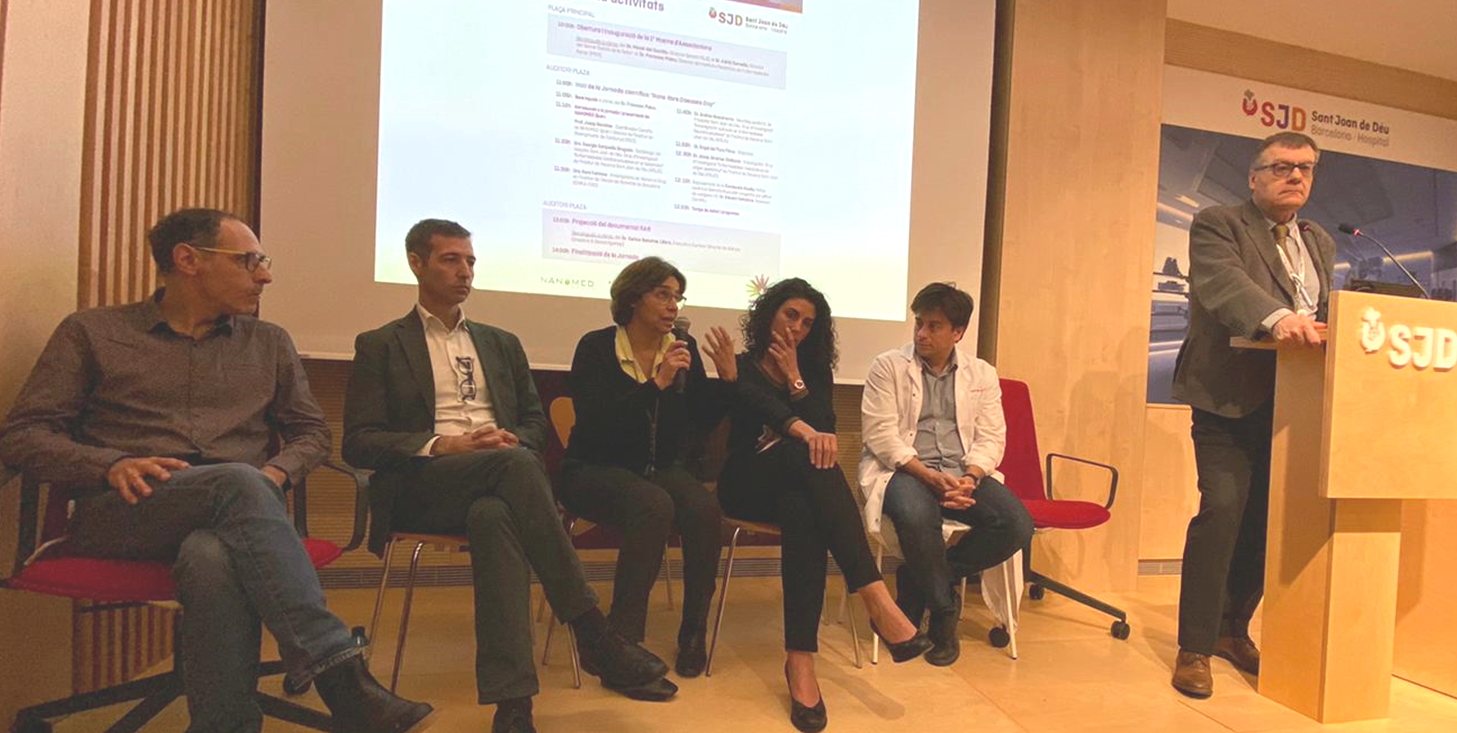 Rare Disease Day is annually held on the last day of February in more than 100 countries with the main objective of raising awareness about rare diseases and their impact on the life of patients to the general public and in particular to policy makers, public authorities, industry representatives, researchers and professionals. Rare diseases are those that affect less than 1 in 2000 people. There are more than 300 million people living with one or more than more than 6000 rare diseases worldwide identified.

Among the events organized we wont to mention the Nano Rare Diseases Day held in Barcelona on February 27, organized by the Hospital de Sant Joan de Déu and the NanoMed Spain Platform, where the latest innovations in the field of Nanomedicine for the treatment and diagnosis of these diseases will be announced, with themes ranging from early diagnosis, controlled release of drugs or the development of new therapies. During this day, experts in Nanomedicine from different fields – research, business, clinical practice, health authorities, patients, etc. – will present the latest advances and give us the opportunity to discover the progress generator that Nanomedicine means for health as creator of new opportunities in the diagnosis and treatment of minority diseases.

Nora Ventosa, Scientific Director of NANBIOSIS U6 Biomaterial Processing and Nanostructuring Unit (CIBERBBN-ICMAB_CSIC) will explain the European Smart-4-Fabry Project: use of nanotechnology for the development of a new drug for the treatment of Fabry lysosomal disease  where four units of NANBIOSIS colaborate.


Last June 18-22 at the 2019, ESC meeting, the European Students Colloid Conference, that took place in Varna, Bulgaria, Judit Tomsen,  PhD fellow at the Nanomol group from CIBER-BBN and ICMAB-CSIC, was awarded with the best oral presentation.

Judit Tomsen, who carries out her work under supervision of Nora Ventosa,  Scientific Director of NANBIOSIS U6 Biomaterial Processing and Nanostructuring Unit, presented her oral communication entitled “Design of peptide targeted nanovesicles for the α-galactosidase A enzyme delivery“. Her talk explained some of the smart4fabry european project results, a project coordinated by CIBER-BBN and Nora Ventosa in which participates NANBIOSIS Unit 6.

The European Colloids and Interfaces Society (ECIS) organizes biannually ESC meetings of advanced students at PhD and MSc level who are undertaking research in the area of colloid and interface science at a European University.

The Fabry International Network (FIN) association established the month of April as the “month of Fabry” to raise awareness and educate about this disease, a rare, progressive and with multi-organ involvement pathology.

Fabry Disease is one of several dozen Lysosomal Storage Disorders that interfere with the body’s ability to break down specific fatty substances. It is a rare disease and because the rate of occurrence is less than 1 in 200,000, it is considered as one of the many “Orphan” diseases. It is more common in women, but it occurs with greater severity in men.

Fabry disease is a metabolic disease that is produced by a deficiency of the ysosomal enzyme Alpha galactosidase. It is transmitted on the X chromosome. Fabry affected patients are missing alpha-galactosidase A (alpha-gal A) which results in sugars and fatty acids (Gb3) accumulating in the cells throughout the body and impairs the function of several major organs including the kidneys and heart. In 2001, enzyme replacement therapy appeared when the alpha-galactosidase protein (alpha- and beta-agalsidase) was synthesized in the laboratory using genetic engineering techniques. This treatment is injected into patients every 15 days to replenish the deficit levels of this enzyme and stop the progression of the disease.

CIBER-BBN, partner of NANBIOSIS, leads the European project Smart4fabry funded by the Horizon 2020 program, which will be developed through a consortium formed by 14 partners from 5 different countries. The CIBER-BBN coordinates the project through the participation of four of its groups that coordinate four units of NANBIOSIS (U1.Protein Production Platform (PPP), U3. Synthesis of Peptides Unit, U6. Biomaterial Processing and Nanostructuring Unit and U20. In Vivo Experimental Platform.) In addition, the consortium is formed by the University of Aarhus (Denmark), Technion Israel Institute of Technology (Israel), Joanneum Research (Austria), Biopraxis Research AIE (Spain), the spin off Nanomol Technologies SL (Spain) ), BioNanoNet (Austria), Drug Development and Regulation SL (Spain), the Covance Laboratories LTD group (UK), and Leanbio SL (Spain) Smart-4-Fabry has been conceived and developed to obtain a new nanoformulation of GLA, that will improve the efficacy and toleration of the treatment with non-formulated GLA. The final benefit will be seen as a considerable reduction on the Fabry disease treatment cost and a substantial improvement in the life-quality of Fabry disease patients.

Fabry International Network, FIN was established in 2005, as a non-for-profit organization registered in The Netherlands. The primary aim of the project is to facilitate collaboration between patient organizations around the world to support those affected by Fabry disease

FIN is connected to over 45 countries around the world. Membership is free and open to any National Patient Organization in which Fabry patients are represented. The National Fabry Disease Foundation – USA, for April 2018 Fabry Disease Awareness Month, have been providing an educational or information post on their Facebook page, every day of the month in April. The NFDF also distributed their My Health Handbook kit  and, so far, distributed about 700 kits to individuals with Fabry disease. Fabry Australia have a new website and they are also running a new social media campaign. Fabry Support & Informatie Groep Nederland, FSIGN, since 2005  has organized every first Saturday of April (in the Fabry Awareness Month April) to be the Fabry women’s day. Japan Fabry Disease Patients and Family Association, in awareness month JFA held an open seminar at Fukuoka University Medical hall with lectures on three major topics: Newborn Mass Screening, Current Treatments and Employment and Clinical Genomics. In Spain the Fabry patient organization are the Spanish Fabry MPS Association

Nora Ventosa, Scientific Director of NANBIOSIS U6, presented the Smart4Fabry project to the compressed fluids community

This event is held every three years, gathering investigators from all domains with the aim to promote knowledge and applications of Supercritical Fluids.

According to the ISASF, International Society for Advancement of Supercritical Fluids, “a fluid is called “supercritical” when both its pressure and temperature are over its critical pressure and temperature. It is monophasic and exhibits specific properties, different from those of liquids and gases. Supercritical fluids have a high solvent power vis-à-vis many compounds, at the difference with compressed gases. This solvent power can be easily modified by changing the pressure, what permits to design very selective processes leading to high-quality products”. 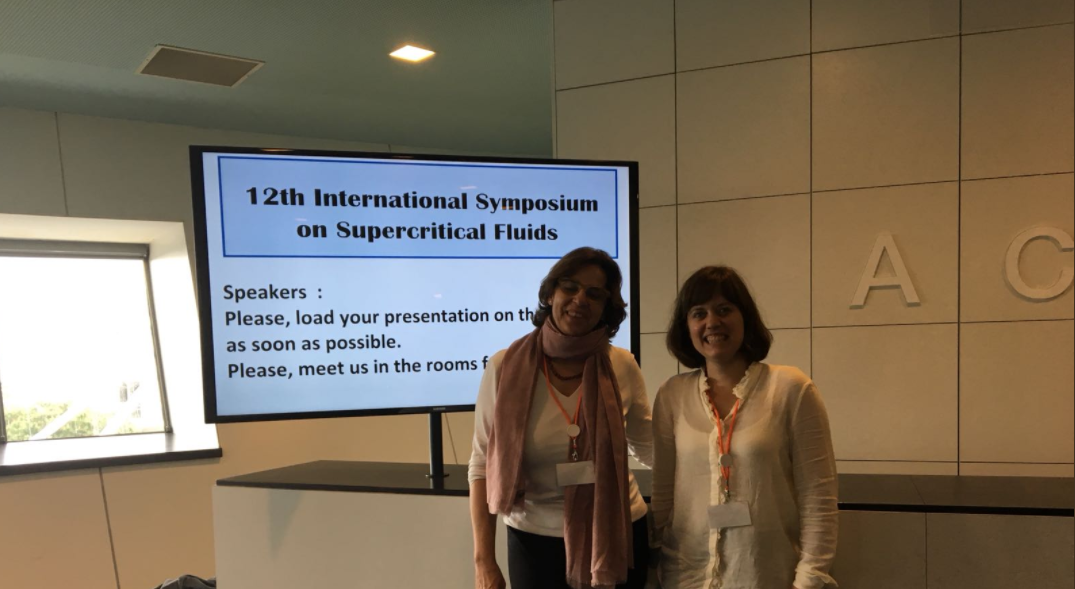