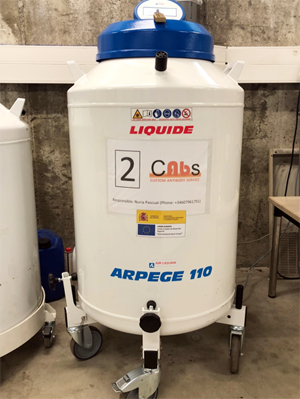 The Cryomemo device is an electronic kit consisting of level and temperature indicators, and acontrol and configuration interface.
It is used to control and regulate the nitrogen levels and temperature of cryogenic tanks (GT 40, Asperge, Espace and RCB) using sernsorand solenoid valves that control nitrogen intake andblowdown. It is also used to manage alarms.

The Cryomemodevice is composed of several subunits controlled by a specific in-built software program:
1- A display unit
2- A control unit
3- A power supply unit
4- Temperature and level sensors
5- Power cable

The following functions are managed by the device:

Automatic level regulation of cryogenic liquid in the container via a relay (dry contactoutput) on a solenoid valve that supplies liquid nitrogen.

Information transmission by Ethernet network, 4-20 mA or RS 485 outputs. The system is controlled by a specific integrated program that acquires and displays the nitrogen (gas or liquid) level and temperature in the monitored tank. The Web Server application is used to access the Control System’s configuration data and measurements via an http connection, in point to point mode. These values can be viewed and modified using an Internet Explorer web browser on a PC, as this is linked to the Control System by an Ethernet cable. An unspecified number of Control Systems connected to an Ethernet network can thus be monitored from one or more PCs.