A new fluorescent probe for NO

You are here : Home / News / A new fluorescent probe for NO 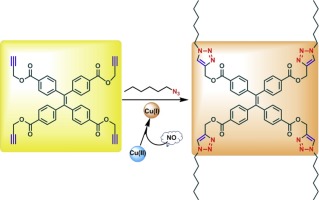 Nitric oxide is a component of the pollutant nitrogen oxides (NOx) responsible of different environmental negative effects. However, due to its physiological effects, NO has been used in different therapeutic applications. Thus, the inhaled nitric oxide (iNO) is a selective pulmonary vasodilator that finds its best applications in pediatrics, by transiently improving oxygenation in respiratory failure and persistent pulmonary hypertension. The initial recommended concentration of iNO in these treatments is 20 ppm. Higher concentrations do not increase its effectiveness and are associated with a higher incidence of methemoglobinemia and formation of nitrogen dioxide. In consequence the control of iNO concentration is of great interest.

To sum up, a new probe capable of selectively detecting nitric oxide was prepared and evaluated. The probe is a tetraphenylethylene derivative and the transduction mechanism is really based on the Aggregation Induced Emission (AIE) phenomena. The click reaction catalyzed by NO modifies the steric volume of the TPE substituents inducing clear changes in the fluorescence emission. A limit of detection of 15 ppm has been determined and the linearity range appears between 20 and 80 ppm suggesting that the probe could be useful to control the use of iNO. Other gases such as NO2, CO2, CO and SO2 do not induce appreciable changes in the measure range. The probe works properly in MeOH:H2O media.

NMR spectra were registered at the Unit 26 of ICTS “NANBIOSIS”: NMR: Biomedical Applications II of ICBER-BBN at the Universitat of Valencia led by Ramón Martínez Máñez and Salvador Gil Grau.