CoNVaT, the ‘Nanotrap’ for the coronavirus – highlighted by BBVA Fundation

You are here : Home / News / CoNVaT, the ‘Nanotrap’ for the coronavirus – highlighted by BBVA Fundation 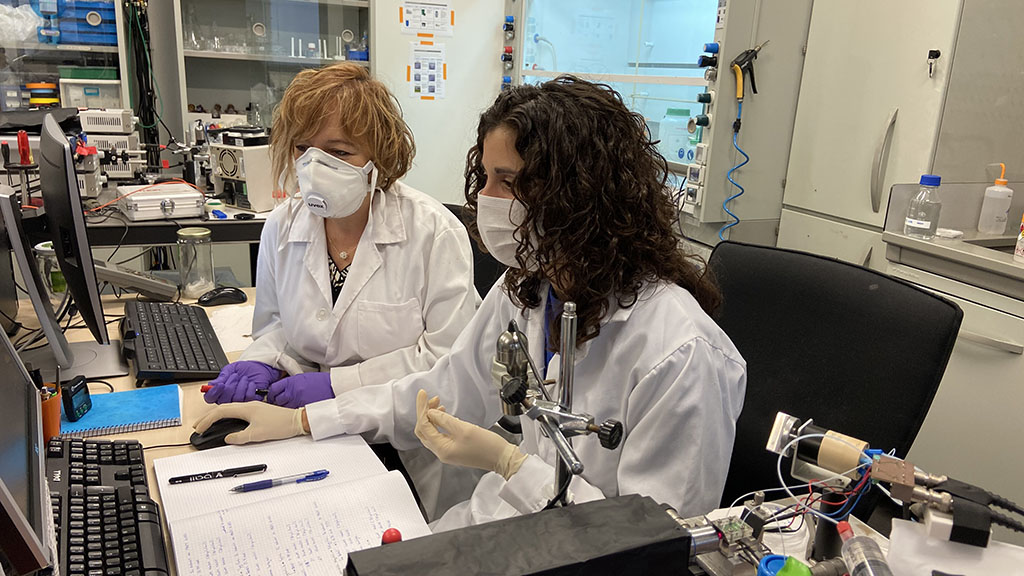 Prof. Laura M. Lechuga, Scientific Director of NANBIOSIS Unit 4 Biodeposition and Biodetection Unit (from CIBER-BBN and ICN2-CSCIC) was awarded with the Physics, Innovation and Technology Award of the Royal Spanish Physics Society (RSEF) and the BBVA Foundation 2016.

BBVA Foundation has dedicated an article to explain the  EU CoNVaT project, led by Laura Lechuga, whose objective is to obtain a diagnostic test for COVID-19 from the first day of infection, fast but highly sensitive, and which does not require a laboratory or qualified personnel. A test made with extremely sophisticated technology, and at the same time low cost, applicable to future waves of the epidemic. It is financed with more than two million euros by the European Union with a duration of one year.

The test is a biosensor that uses nanophotonics, and it will be used in two devices: one will detect virus proteins, the other, its genetic material. The heart of the device, and what gives it its main advantage over other existing diagnostic tests, is a chip that implements one of the most sensitive measurement techniques in physics: photonic interferometry. It is based on the idea that a beam of light undergoes small but measurable changes when it intersects an object. On the CoNVaT project chip, changes in the light beam will alert to the presence of the virus in the sample.

The test that will detect virus proteins is what is technically called an ‘antigen test’. It can be carried out in health centers or at sampling points, by non-specialized staff, and will give results in less than thirty minutes. Saliva samples will surely be used, although researchers are still studying it.

“The technique is so sensitive that it will be able to detect the presence of the virus from the first day of infection,” explains Lechuga. “And it will not only tell if the virus is or not, but also in what quantity. This is important because it gives an idea of ​​how advanced the infection is. ”

The device will occupy what a shoe box, but at its core, where the measurement takes place, everything happens on a nanometric scale, that is, to dimensions of millionths of millimeters. It is, in essence, a nanotrap for proteins. Researchers attach proteins designed in the laboratory specifically to trap certain proteins in the virus envelope to the chip; both fit as a key and lock, so that the proteins fixed on the chip are actually hooks of the highest specificity – they only capture the virus’s proteins.

Channels a few nanometers thick have also been engraved on the chip: light passes through them. These guides form a circuit with a single input, but which forks, so that only one of the branches passes through the protein trap. When both light beams meet again, it is observed that the one that has interacted with the proteins has undergone modifications, and it is the analysis of these changes that reveals the presence of the virus, and in what quantity.

The device to detect genetic material of the virus -RNA- is based on the same principle, but it should be done in the laboratory. Lettuce explains that its purpose will be above all to confirm the result of the first. It will be faster than the PCR currently used – less than half an hour versus several hours – and it does not need specialized technicians – something indispensable with PCR.

Biology is the most difficult

“In this type of device, the biological part is by far the most complex,” explains Lechuga. Anchor the proteins to the chip at the correct angle, stabilize them to resist movement, keep them in a liquid medium … “they are thirty steps”.

It is a very sophisticated technology but already validated in the clinic. The ICN2 Biosensors and Bioanalytical Applications Group led by Lechuga has developed, among others, nano-biosensors that detect colon cancer early in blood samples, and also for tuberculosis and sepsis cases. “One of the reasons we have achieved the ConVAT project is that we have experience with clinical samples, which is really a completely different world than the laboratory.”

The group advances fast. They started working about three weeks ago and have just received from their French collaborators proteins that match those of the virus. Patient validation, when the device is completed, will be handled by the group in Italy.

The objective, at the end of the project, is for a company to take care of scaling the technology to bring it to the market at an affordable price. “Especially in a situation like the current one, we work with the idea that our work can reach everyone, as soon as possible,” says Lechuga.