Jose Luis Pedraz, Jesus Ciriza and Angela Losada of NANBIOSIS U10 Drug Formulation – NanoBioCel Group of CIBER-BBN and University of the Basque Country were in Leuven, Belgium attending the European Project POSITION-II Workshop #5, which was held between January 21 and 23. The workshop was held at the facilities of iMEC, one of the partners of the project and world leader in R&D in nanoelectronics and digital technology.

The project lasts three years and after 18 months, in this workshop, the researchares of NANBIOSIS U10 Drug Formulation, have microencasulated and characterized the heart cells with the aim of checking the viability of the capsules for the treatment. In the next month all the team members of our workpackage (WP7) will meet with purpose of integrating each of the components of the final catheter (assemble them) to proceed with their validation because next year the validation must be done in vivo.

This work is part of  a pilot line for realising the next generation of smart catheters and implants by building on Europe’s strength in medical diagnostic equipment and monitoring systems. 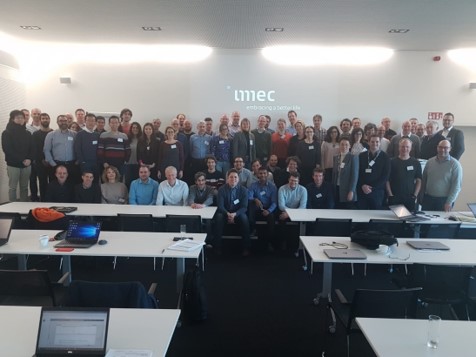 NANBIOSIS working on the development of next generation catheters

NANBIOSIS’ partners CIBER-BBN and JUMISC, with another 44 European partners, led by Philips Electronics Nederland B.V, will work on the development of next genration catheters.
The project, Position-II  (Ref. n. 783132), that pretends to diversify the production of smart catheters (overcoming the obsolescence of current ones), improve their performance (facilitating their use to be smaller), reduce current production costs and break existing monopolies, has been submitted to the Call for Electronic Components and Systems for European Leadership (ECSEL)- Horizon 2020, with a duration of three years -starting on 1/6/18- and with a budget of over €41M, (€10.4M-financed by European Union)
The objective of the participation of JUMISC in Position-II is to develop new catheters that, in combination with hydrogels and cell therapy, will have a regenerative effect to stimulate the recovery of cardiac areas damaged by heart attacks. NANBIOSIS U10. Drug Formulation, of CIBER-BBN, at UPV-EHU, coordinated by José Luis Pedraz and Jsús Ciriza, will microencapsulate the cells to be test and administered in porcine model  at the JUMISC to validate the designed catheter.
The kick-off of the Eurpean project under Grant Agreement Ecsel-783132- POSOTION II 2017-IA  took place on June 5 to 7 in Rotterdam, representatives of the NANBIOSIS-ICTS  Steering Committee, unit 10 and unit 24 were present.

The project, funded through the Horizon 2020 call with a global budget of more than 50 million euros, will be developed during three years with the participation of 48 partners. Its general objective is to innovate in the production processes in the field of health to obtain state-of-the-art catheters. It will also include innovative treatments, such as cell therapy, which guide small capsules with cells with a regenerative effect to stimulate the recovery of damaged cardiac areas during the infarction.

The Nanobiocel group will be responsible for carrying out the formulation of the cells in hydrogels, for administration through the catheter at the cardiac level, for the regeneration of heart tissue.

In the development of the project, NANBIOSIS U10 “Drug Formulation Unit ” will participate. This Unit, located in the Faculty of Pharmacy of the UPV / EHU, has the capacity to design and evaluate classic dosage forms and new forms of biotechnological drugs, DNA, RNA and vaccines, using different methodologies based on micro and nanomedicine. This last methodology, based on the microencapsulation of cells, peptides, proteins and, in general, of biotechnological products, as well as the development and design of non-viral vectors for gene therapy, is one of the greatest singularities of this unit. It has the most advanced equipment for micro and nanoencapsulation.

The Eurpean project under Grant Agreement Ecsel-783132- POSOTION II 2017-IA, seeks to reverse the nowadays obsolete production of catheters (in the last decade there have been no innovations in this field). This justifies, from a business point, the investment in new R & D lines. In addition, it will introduce open technology platforms to increase miniaturization, the integration of electronics, wireless communications and their encapsulation. These technology platforms will renew catheter-based interventions, improving performance and reducing current production costs. It also seeks to break the current monopoly of US companies in the development and production of smart catheters.