You are here : Home / News / A new method simple and efficient for the preparation of Oligonucleotide-protein conjugates 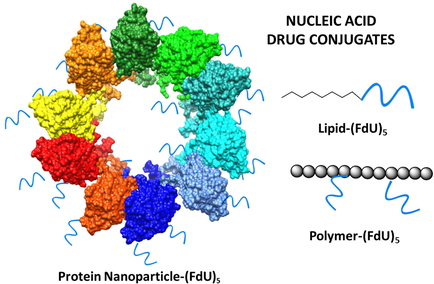 Oligonucleotide-protein conjugates have important applications in biomedicine. Four units of NANBIOSIS have collaborated to come across with more simple and efficient methods for the preparation of these conjugates.

In the publication of the research results, a new method is described in which a bifunctional linker is attached to thiol-oligonucleotide to generate a reactive intermediate that is used to link to the protein. Having similar conjugation efficacy compared with the classical method in which the bifunctional linker is attached first to the protein, this new approach produces significantly more active conjugates with higher batch to batch reproducibility. In a second approach, direct conjugation is proposed using oligonucleotides carrying carboxyl groups. These methodologies have been applied to prepare nanoconjugates of an engineered nanoparticle protein carrying a T22 peptide with affinity for the CXCR4 chemokine receptor and oligomers of the antiproliferative nucleotide 2′-deoxy-5-fluorouridine in a very efficient way. The protocols have potential uses for the functionalization of proteins, amino-containing polymers or amino-lipids in order to produce complex therapeutic nucleic acid delivery systems.

Protein production and DLS have been partially performed by the NANBIOSIS Units of CIBER-BBN  U1 Protein Production Platform (PPP) at IBB-UAB  and  U6 Biomaterial Processing and Nanostructuring Unit of CIBER-BBN and ICMAB-CSIC. Also, NANBIOSIS U18 of Nanotoxicology at the Hospital de la Santa Creu i Sant Pau has been used and the team of researcher counted with the NANBIOSIS expertise of U29 Oligonucleotide Synthesis Platform (OSP) at IQAC-CSIC