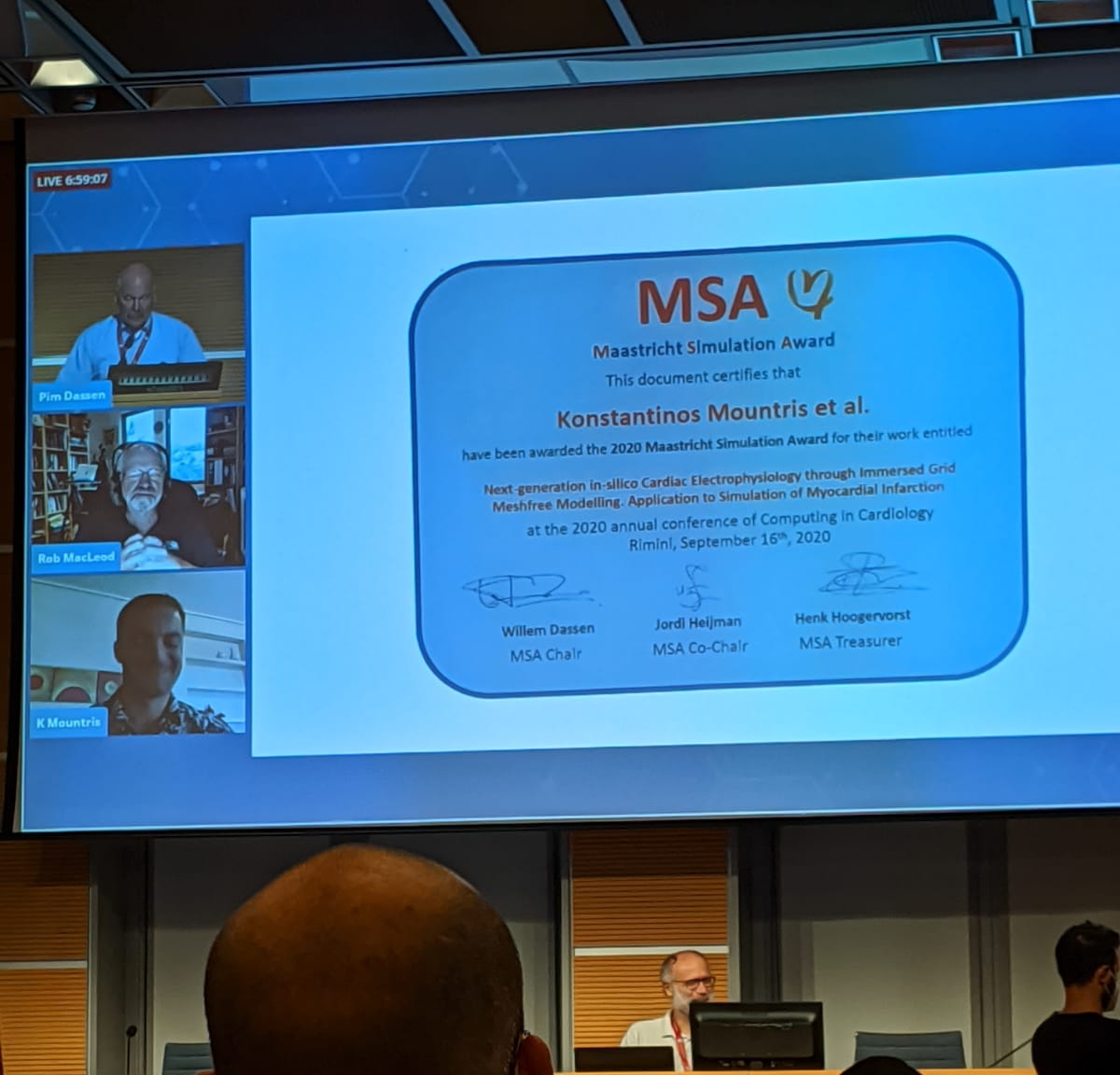 Konstantinos Mountris and Esther Pueyo, (NANBIOSIS Unit 27 High Performance Computing), have been awarded with the Maastricht Simulation Award for their participation in the CinC 2020.

Researchers of BSICoS Group, from CIBER-BBN and I3A of Zaragoza University, have participated in the 47 Computing in Cardiology Conference, which took place in Rimini, Italy, during the days 13-16 of September. Alba Martín, was awarded with the Best Remote Poster Presentation for the poster entitled “Model-based characterization of atrial fibrilation episodes and its clinical association“. And the work “Next-generation in-silico Cardiac Electrophysiology through Immersed Grid Meshfree Modelling. Application to Simulation of Myocardial Infarction” by Konstantinos Mountris and Esther Pueyo has been awarded with the CinC Maastricht Simulation Award (MSA).

This work proposes a novel Meshfree Immersed Grid method for cardiac electrophysiology simulation and its application in the simulation of myocardial infarction. Usually, cardiac electrophysiology simulation is performed using mesh-based techniques like the Finite Element Method. Such techniques implicate the generation of a mesh discretization of the domain of interest that can be a time-consuming process, especially for complex anatomical models. The Meshfree Immersed Grid alleviates the necessity for mesh generation and allows eliminating the mesh-related limitations. Using the HPC services of NANBIOSIS U27 High Performance Computing, – explains Konstantinos Mountris – we were able to validate the Meshfree Immersed Grid method as a promising alternative to Finite Element Method performing large-scale simulations of myocardial infarction in biventricular swine models.

The goal of this award (and its $500 prize) is to recognize the best submission to the conference each year on the topic of cardiovascular simulations.

2020 Is the second consecutive edition of the CinC Conference in wich members of Bsicos Group and NANBIOSIS U27 are awarded with the MSA. In 2019 the winner was Violeta Monasterio with the work Influence of the Stimulation Current on the Differences between Cell and Tissue Electrophysiological Simulations.