NANBIOSIS U7 Scientific Director, J Samitier and his vision on technology as a source of eternal youth

You are here : Home / News / NANBIOSIS U7 Scientific Director, J Samitier and his vision on technology as a source of eternal youth 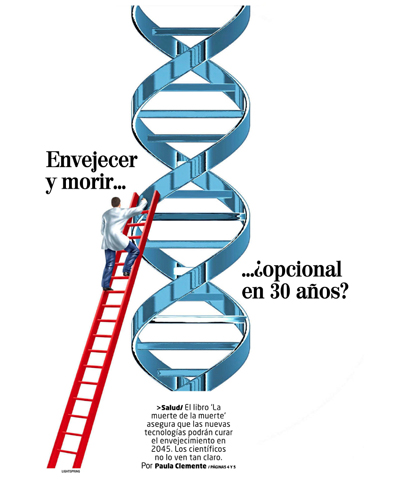 Josep Samitier, Scientific Director of U7 of NANBIOSIS, Nanotechnology Unit, has been recently featured in an article in the Jornal “El Mundo”

Following the publication of the book “The Death of Death” by Jose Luis Cordeiro and David Wood, which says that by 2045 death will optional thanks to new technologies finding a way to cure aging, the article interviewed Josep Samitier, to have a more realistic point of view.

The book ‘Death of death’ assures that in 2045 die will be something optional thanks to the new technologies will find a way to cure aging based on success examples of regenerative medicine, stem cell treatments, therapies genetics, 3D printing of organs or bioengineering, that in approximately 30 years aging will be a curable disease, that young indefinite longevity will be achieved, or, in other words, the possibility of being young indefinitely and that death will be, defect, something optional.

José Luis Cordeiro, co-author of the book goes back to 1950 to remember that it was there when it was discovered that the problem of cancer is that it is biologically immortal. They are, in the same way, germ cells or some stem cells, present in all organisms. “What we did not have before is the technology we have today, which allows us to detect the genetics of these cells, when the body dies, the germ cells, the mother and the cancer die, because the food ends, but if they are isolated and they are kept in the right environment, these cells are kept alive permanently”. So, his proposal is to investigate what determines that these are immortal cells and try to imitate the process to find the way that this affect our aging until it stops.

Dr. Angel Raya, Principal Investigator of the CIBER-BBN in the Center of Regenerafiva medicine of Barcelona clarifies that “the diseases that affect us in relation with aging are diseases in which the symptom is produced by the failure of one of the parts of the system, the idea is that if we recover the function of that part in a functioning system, the patient will not have that disease, but that does not mean that he will have more life”.

According to Josep Samitier, “there are fundamental problems associated with aging, such as the loss of muscle mass, the loss of certain capacities …, the human being has cells that are born, develop, die and they are replaced by others, but as we gain years, the replacement stops occurring, understanding. Well this, that does not happen and is maintainance is much more complicated”. In short, the experts consulted affirm that the human body is not reduced to the parts or organs that make it up, and that fixing its mechanical failures will not result in lengthen life indefinitely. “A house made of billets can crumble, but the materials that constituted it, the iron and silicon atoms that form the sand and the iron beams will remain there even if the house disappears,” continues Samitier, “In the same way, we are made up of water, carbohydrates, fats …, the atoms of these substances endure and are quite immortal, but we have to think about the organization of this system, and what we see is that it is something difficult to maintain in a functional way for many years. Advances in bioengineering will help us to live longer and with better quality of life, we will solve some issues and we will have options to fix hearts after heart attacks and things like that, but the problem is not that one thing fails, it is that several fail”.