NANOMEDICINE AND FUTURE, explained by Simó Schwartz, Director of U20 of NANBIOSIS.

You are here : Home / News / NANOMEDICINE AND FUTURE, explained by Simó Schwartz, Director of U20 of NANBIOSIS. 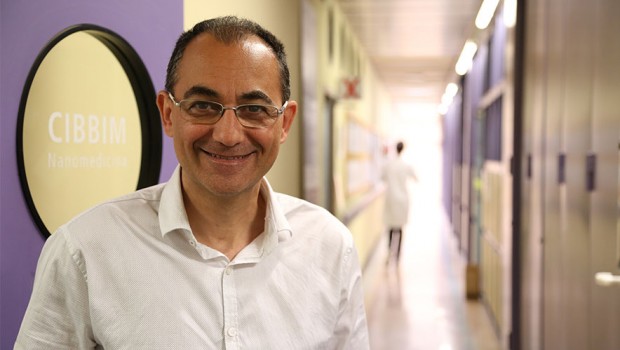 NANBIOSIS-U20 Scientific Director, Simó Schwartz, speaks about Nanomedicine in an interview publish in http://www.quimicaysociedad.org.  NANBIOSIS is an Singular Scientific Technological Infrastructure (ICTS) that provides a complete service for the production and characterization of nanomaterials, biomaterials and systems in biomedicine, including the design and production of biomaterials and nanomaterials and their nanoconjugates, and the characterization of these bio-/nanomaterials, tissues and medicals devices from a physic-chemical, functional, toxicological and biological (including preclinical validation) point of view, focused also on biomedical applications such as: IVDs, biosensors, regenerative medicine, drug delivery, therapeutic agents or MRI contrast agents and medical devices.

Question: First of all, what is meant by nanomedicine?

Answer: Nanomedicine is considered any application of nanotechnology that aims to improve the treatment or diagnosis of a disease. In fact, one of the most important aspects of nanomedicine is to generate drugs with different components whose functions at the nanoscale are different when they are linked to when they are not. This makes the nanomedicines per se have a series of attributions that make, in general, their present use very clear advantages for the treatment with respect to conventional medicines. They are much more effective medicines, focussed on the target cells that are intended to be treated and with many less toxic effects.

For some editions Expoquímia has hosted conferences on this new type of medicine.

Numerous clinical trials are now underway in which the therapeutic efficacy of many nanomedicines is already being tested. Therefore, it is a fast-moving science that is already present in the market. Thus, there are already anti-tumor drugs that are nanomedicines, which have displaced the conventional treatment that was used until recently, for example, in breast cancer. And there are many more that we hope will get into the usual clinical practice in the coming years.

What types of diseases can nanomedicine be applied to? And with what results?

In principle, there is not a single specific prototype of disease in which nanomedicine can be applied or not. Any disease is susceptible of being treated by means of nanomedicine if  it is necessary to transport a drug of a specific form to a specific site, reducing the general undesirable effects of medicines  and  increasing their effectiveness. At the moment, it has been tested that the use of nanomedicines implies a greater therapeutic efficiency to be able to transport more drugs to the places where they are needed and much less to the places to which they should not arrive.

In reality, nanomedicines are drugs that have a specific transport system that makes that medicine instead of circulating freely through the blood is transported in a specific way to a specific site. During that transport, that drug can not act anywhere and, therefore, can not have any kind of adverse effect as if it were for free. And, in this sense, the results are good, as there is more therapeutic indication and much less general toxicity. Thus, in treatments such as cancer, where the drugs are very aggressive and have many adverse effects, nanomedicines compensate in a substantial way.

Do you think that a greater implantation of nanomedicine could eradicate diseases that, today, are incurable?

A disease is incurable because it has no known treatment or because that treatment is not specific enough or has a very narrow efficacy and toxicity index. That is, the therapeutic window is very narrow and per se they are very toxic. In that sense, nanomedicine, by reducing the general toxicity of the drug and being much more specific, can make certain diseases, which today have a low cure rate, improve. But nanomedicine is a specific chemical transport system, which always needs a drug or a molecule, which is the active principle that is, through a mechanism of action determined, to cure that disease. This includes gene therapy.

How can a major use of nanomedicine be encouraged? Is it open to public-private collaboration?

Definitely. Nanomedicines are just new medicines. Therefore, a drug that is effective, based on scientific evidence and medical at the level of clinical practice, will always have a majority use. Consequently, as in any other medicine, public-private collaboration is more than necessary because the amount of investment required to put a nanomedicine in the market is as high as that needed by any other medicine on the market. And today, such partnerships are essential to ensure that these drugs come to term.

Besides the economic aspect, are there other factors that can prevent the expansion of nanomedicine as a treatment?

Like any other medicine, the main problem that nanomedicine has is the high economic cost of its development. It must be borne in mind that it has to go through numerous regulatory phases, demonstrate efficacy and declare that there is no toxicity or an acceptable general toxicity like any other drug. And there the economic aspect is fundamental. In principle, there are no other factors. But it is true that, today, the production process of these nanomedicines is more complicated, since they are formed by several components. And there is no factory that is capable of generating any nanomedicine anywhere. And that is a problem, but at the same time, it represents an opportunity for the pharmaceutical industry.

In this sense, what is the purpose of the Nanomedicine Day that will take place in Expoquimia 2017?

The main objective is to disseminate what nanomedicine represents and means, as well as the therapeutic opportunities it entails,to facilitate the understanding  of the difference between a conventional medicine and a nanomedicine, how nanomedicines work and why they are more effective and less toxic and why there is so much interest in developing and using these systems to improve the results of current treatments.

Lastly, shall nanomedicine be the medicine of the 21st century?

Undoubtedly, many diseases will be treated with nanomedicines, since they allow a more effective treatment and with less toxicity.