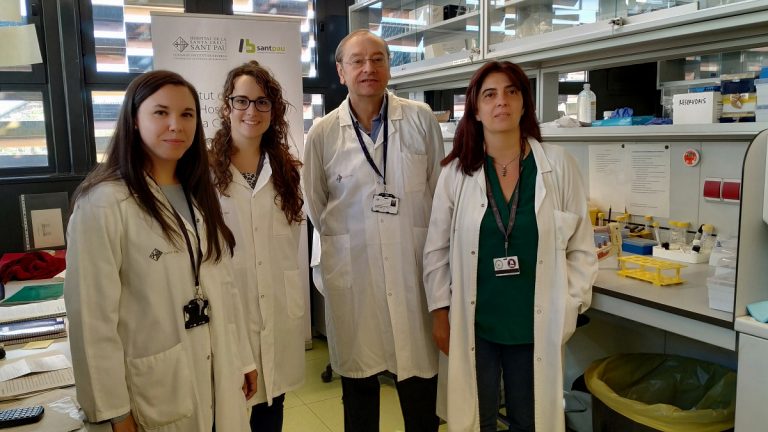 A non-Hodgkin’s lymphoma, NHL is a cancer that starts in white blood cells called lymphocytes, which are part of the body’s immune system.
Lymphoma. NHL is a term that’s used for many different types of lymphoma that share some characteristics.  The most prevalent type of non-Hodgkin lymphoma is called diffuse large B-cell lymphoma (LDCGB). Although there are treatments for this pathology, there are non-responders.

This nanoparticle can be developed as a nanopharmaceutical, in order to introduce a new treatment, which could be used in 40 percent of patients with non-Hodgkin lymphoma who do not respond to current therapy, and avoiding the adverse effects associated with conventional treatment.

The research conducted by the CIBER-BBN at the Hospital de Sant Pau, led by Ramón Mangues (Nanbiosis U18 Nanotoxicology Unit) and the Autonomous University of Barcelona, led by Antoni Villaverde Nanbiosis U1 Protein Production Platform (PPP) has demonstrated the high selectivity of a protein-based nanomedicine and created by the researchers themselves, for the targeted delivery of a toxin in the tumor cells to induce their selective death. The objective is that these nanoparticles can be developed as a nanopharmaceutical, which could be used in 40 percent of patients with non-Hodgkin lymphoma who do not respond to current therapy, avoiding the adverse effects associated with conventional treatment

This selective effect of the nanopharmaceutical is due to the specific interaction between a targeting peptide that contains the protein nanoparticle that carries the toxin and the CXCR4 cell receptor that is highly overexpressed in lymphoma cells. This is the first time that the uptake of protein nanoparticles in different organs of a hematological neoplasm is quantified.

This observation has shown that 86 percent of the administered dose accumulates in cancer cells, a substantial improvement compared to other non-protein nanoparticles or other drug targeting systems such as drug-antibody conjugates, which only reach 1 percent of the dose in the tumor.

As Ramón Mangues, Scientific Director of Nanbiosis U18 Nanotoxicology Unit, explains, “the new protein nanoparticle contains a ligand that identifies a CXCR4 receptor on the surface of cancer cells in which it enters selectively, reaching a very high uptake of the tumor and very low in the rest of the body, which greatly exceeds the tumor uptake of drugs used for this type of lymphoma.”

The bioluminescent follow-up of cancer cells and nanoparticle biodistribution and toxicity studies has been performed in the ICTS NANBIOSIS Nanotoxicology Unit Protein production has been partially performed by the ICTS “NANBIOSIS”, more specifically by the Unit of Protein Production Platform.