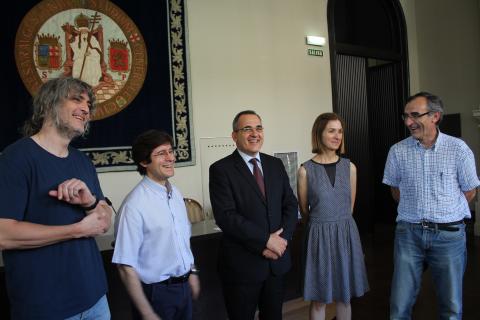 The European Union has selected the projects sponsored by two researchers from Unit 27 of NANBIOSIS: Esther Pueyo, with “PIC”, to customize the diagnosis and cardiovascular treatment and Pablo Laguna, with “MY-ATRIA”, to improve the early detection of arrhythmias Cardiac. Both projects include massive calculations that will be executed through  unit 27 of NANBIOSIS, High Performance Computing.

“MY-ATRIA” / Mutlidisciplinary and training network for Atrial fibrillation monitoring, treatment and progression “, by Pablo Laguna, Professor of Signal Theory and Communication and researcher of the group BSICoS of I3A and CIBER-BBN and Scientific Director of Unit 27 of NANBIOSIS, will affect the early detection of Atrial fibrillation, since it is one of the most frequent cardiac arrhythmias in the adult population. We will study the cellular electrophysiological analysis that leads to the appearance of the arrhythmias so as to be able to design more efficient drugs and to guide the surgeon efficiently in the surgical interventions of ablation of the arrhythmia with minimal affectation on the atrium.

In this project with 3M euros to train 12 researchers, the group will receive 500,000 euros to hire two young pre-doctoral students.

“PIC- Personalized In-Silico Cardiology”, obtained by Esther Pueyo, a professor and researcher at the I3A at the University of Zaragoza, who holds a ‘Starting Grant’, seeks the development of mathematical and computational tools to model cardiovascular physiology in healthy subjects and patients with cardiovascular diseases and evaluate different forms of therapy.

PIC, which will train 15 researchers, has 3.9M euros, of which 250,000 euros correspond to the BSICoS group, coordinator of Unit 27 of NANBIOSIS. The network is coordinated by King’s College London and involves seven universities from EU countries as well as nine other non-academic organizations, including IBM, Medtronic and Janssen Pharmaceutica, or John Radcliffe Hospital.