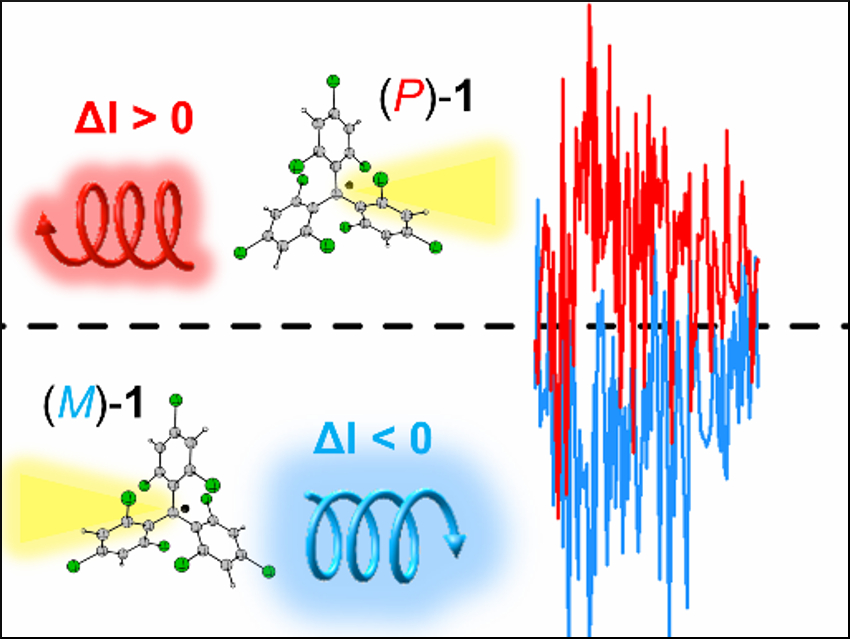 Jaume Veciana, Scientific Director of NANBIOSIS is coauthor of an article chosen to be highlighted on the ChemistryViews newsletter: “Organic Free Radicals as Circularly Polarized Luminescence Emitters”, published in Angewandte Chemie International Edition, and is about the intrinsic chiral emission of enantiometric organic free radicals.

The short news about the paper is entitled “Circulary Polarized Light from Organic Radicals” is available here.

Circularly polarized luminescence (CPL) can occur when a luminescent compound has a chiral structure. Organometallic structures are leading in CPL activity. However, purely organic CPL emitters are promising alternatives in several applications where low toxicity is important
(i.e., bioimaging).

Jaume Veciana (Institut de Ciéncia de Materials de Barcelona (ICMAB), Spain), Araceli G. Campaña (University of Granada, Spain) and colleagues have found a new approach for the optimization of organic emitters with intrinsic chirality. In particular, tris(2,4,6-trichlorophenyl)methyl (TTM) and perchlorotriphenylmethyl (PTM) radicals, which both have a chiral propeller-like shape, were used. In addition to their chirality, these materials are magnetically active. They are also easy to modify in order to optimize their properties.

The team separated the two racemic compounds into their enantiomers using chiral stationary phase high-performance liquid chromatography (HPLC). The CPL spectra of the four resulting fractions (examples pictured) were recorded and the researchers found highly efficient chiral emission for both pairs of enantiomers. According to the researchers, this is the first time results about the intrinsic chiral emission from enantiomeric organic free radicals have been reported. The work might be a starting point for the development of improved chiral organic radical emitters.