The general consul of France meets with NANBIOSIS researchers

You are here : Home / News / The general consul of France meets with NANBIOSIS researchers 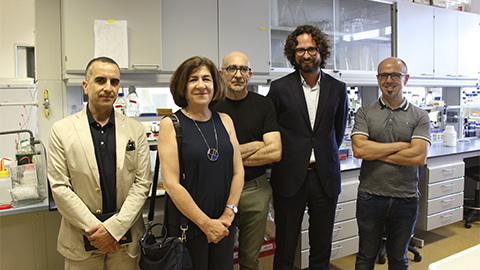 The general consul of France in Barcelona, ​​Mr. Cyril Piquemal visited the IBB UAB facilities last July 18, to find out about the research that is being carried out and, in particular, explore possible collaborations in nano-pharmacy development projects.

During the visit, the Consul of France in Barcelona was received by Màrius Martínez, Vice President of International Relations at the UAB; Maite Paramio, Deputy Vice President; Ivan Martínez, vice president of Research; Salvador Ventura, director of the Institute of Biotechnology and Biomedicine, and Antonio Villaverde, head of the IBB Nanotechnology Unit-NANBIOSIS  U1. Protein Production Platform (PPP)

Next, the mayor visited the facilities and laboratories of the Institute and met with the researchers Esther Vázquez and Antonio Villaverde, (NANBIOSIS  U1. Protein Production Platform (PPP)), and Ugutz Unzueta and Ramón Mangues, (NANBIOSIS Unit 18  Nanotoxicology Unit)  at the Institute of Research of the ‘Hospital de la Santa Cruz and San Pablo, to find out about the research in the development of nanoparticles for metastases treatment by means of the selective elimination of tumor stem cells.

In addition, the researchers explained to the consul the case of the spin-off Nanoligent, to show a project born from the research  and whose objective is to develop the first selective drug to treat metastasis

The purpose of the meeting was to explore possible collaborations between the University and the Consulate, an entity that aims to connect research groups and venture capital funds with the Catalan biotechnology ecosystem.