The European project “Smart-4-Fabry”, is coordinated by CIBER-BBN, specifically by NANOMOL group at ICMAB-CSIC (Dr. Nora Ventosa) and the Biomaterial Processing and Nanostructuring Unit (U6) of  ICTS “NANBIOSIS”, and it also counts with the participation of NANBIOSIS Units U1 Protein Production Platform (PPP), U3 Synthesis of Peptides Unit, and U20 In vivo Experimental Platform.

Fabry disease is an inherited genetic disorder of the lysosomal storage group, which affects many organs and parts of the body, as it is caused by the accumulation of a lipid in the lysosomes of the cells, altering their functions and leading to cell death. This accumulation is due to the lack of an enzyme, α-Galactosidase A (GLA). The symptoms are many: limb pains, stains on the skin, problems with sweating, blurred frontal vision, gastrointestinal problems, loss of hearing, etc. In the long term it can cause renal failure, and heart and central nervous system problems.

Patients can lead a normal life with the current treatment called “enzyme replacement therapy”, where GLA is administered intravenously to patients. However, this treatment exhibits several drawbacks, related to a high instability, high immunogenicity or low efficacy of this molecule crossing cell walls. The development of a new treatment for this disease, as well as for other rare diseases, has become a priority challenge within the European program H2020.

Smart-4-Fabry, acronym for “Smart functional GLA-nanoformulation for Fabry disease”, was born with the idea of ​​obtaining a new nanoformulation of GLA that will improve the efficacy and tolerance of the existing treatments. The project will advance from experimental proof of concept, to the preclinical regulatory phase. The ultimate goal is to reduce the treatment cost and to improve the quality of life of patients with Fabry disease. 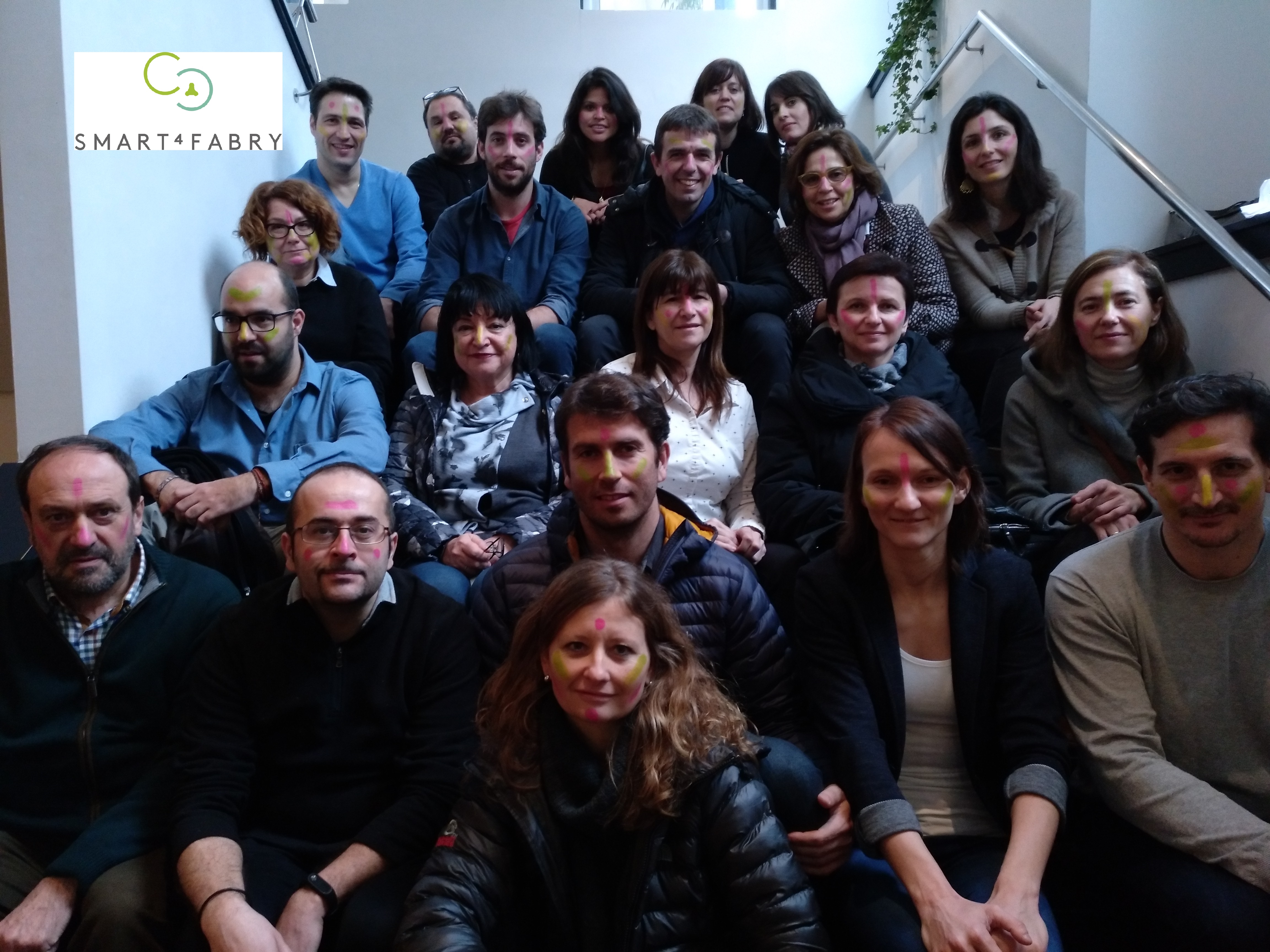 On February 22nd, the National School of Health of the Carlos III Health Institute hosted the forum on Smart Biomaterials and biomedical devices for applications in drug delivery and regenerative medicine, organized by the ICTS Nanbiosis, an infrastructure shared by the CIBER-BBN and the Center of Minimally Invasive Surgery Jesus Usón (CCMIJU). This is the first groups/companies meeting organized by Nanbiosis, in which about 70 B2B meetings  were held.

The meeting brought together about 40 participants from 14 research groups (from the CIBER-BBN and the CCMIJU) and 10 companies, which discussed the latest advances in the research lines developed by the groups and platforms of Nanbiosis and on the needs and demands of the industry in smart biomaterials and devices for targeted drug delivery and regenerative medicine.

Jesus Izco, Coordinator of Nanbiosis, presented the new “Cutting-Edge Biomedical Solutions“, soon available on the ICTS website. These are integrated solutions to advanced challenges in nanomedicine, biomaterials, medical device, and diagnostic that can be developed by several units under a  one-stop shop model, optimized with the experience and scientific and technical knowledge of the research groups of excellence that manage the involved units. Some of the Cutting-edge biomedical solutions presented in the meeting were preclinical validation of biomaterials, mechanical and surface characterization, biocompatibility and studies of biofilm formation and infections.

The CIBER-BBN prsentations were: “Instructive materials for regenerative medicine” by Miguel Ángel Mateos (NANBIOSIS U5 IP: Elisabeth Engel); “Molecular biomaterials for drug delivery and biomedical applications” byNathaly Veronica Segovia (NANBIOSIS U6 / IP Jaume Veciana and Nora Ventosa); “Advances with micro-nano technologies for in vitro devices and point of care” by Rosa Villa (NANBIOSIS U8 ); “Development of new dosage forms for advanced therapies based on new biomaterials” by José Luis Pedraz (NANBIOSIS U10); “Contact lenses functionalized for the prevention of corneal infections” by Jordi Esquena (NANBIOSIS U12 / IP Carlos Rodríguez); “Combined in-silico and in-vitro models of the cell microenvironment and drug delivery effects in cancer and tissue engineering applications” by Fany Peña (NANBIOSIS U13 / IP Miguel Á. Martínez); “Surface of the biomaterial: the first contact with our body” by  Marisa González (NANBIOSIS U16 ); “Use of biomaterials for the repair of soft tissue defects” by Bárbara Pérez Khöler (NANBIOSIS U17 / IP J M. Bellón and Gemma Pascual); “Controlled release systems based on mesoporous materials with molecular doors for applications in therapy and diagnosis” by Ramón Martínez Máñez (NANBIOSIS U26); “New intelligent devices and biomaterials for the treatment of pathologies of the retina and the nervous system” (Eduardo Fernández); and “Near-infrared responsive scaffolds for biomedical applications” (Nuria Vilaboa).

On the part of the CCMJU, the presentations were the following: “Application of Mesenchymal Stem Cells in preclinical models for surgical and cardiovascular research” by Javier García Casado (NANBIOSIS U14); “Regenerative medicine in animal models of cutaneous healing and diabetic models” by Beatriz Moreno (NANBIOSIS U19); “Preclinical studies of biomaterials” by Idoia Díaz-Güemes (NANBIOSIS U21 /IP: FM Sánchez Margallo); “Porcine model of myocardial infarction as a translational research platform in regenerative medicine” by Verónica Crisóstomo (NANBIOSIS U24).

In the turn of the companies, they presented some collaboration opportunities AJL, i-Vascular, Praxis Pharmaceutical, Technical Proteins Nanobiotechnology and REGEMAT 3D; and they also participated in the Rovi, Viscofan, Biomag and Biogelx Laboratories forum.

These meetings, where links are established between research groups and companies, address issues of business and scientific interest, allowing direct contacts between researchers and business managers.

NANOMOL, the research group coordinating ICTS “NANBIOSIS” Unit 6, has been accredited with the TECNIO certification as a Technology Developer Organization, until 2019. This TECNIO certification was created by the Government of Catalonia, through ACCIÓ. This certification supports the most qualified agents involved in technology transfer processes, allows companies to access advanced R&D and develop new products and services, and increases the scope of technology projects by finding the most suitable technology partners & suppliers.

NANOMOL is a research group depending on the Institute of Material Science of Barcelona from CSIC, with wide expertise and recognized excellence in the synthesis, processing and study of molecular and polymeric materials with chemical, electronic, magnetic and biomedical properties. NANOMOL is also a member of Biomedical Research Networking center in Bioengineering, Biomaterials and Nanomedicine (CIBER-BBN) and of the technology transfer network TECNIO from ACC1Ó-Generalitat de Catalunya. The development by Nanomol of the different prototypes of nanocapsules will be performed in the ICTS “NANBIOSIS”, more specifically by the Biomaterial Processing and Nanostructuring Unit (U6) of the CIBER in Bioengineering, Biomaterials & NanomedicIne located at the ICMAB-CSIC.

The use of In vitro testing with living cells as an alternative to animal research has limitations like the difficulty to reproduce the interaction of cells. To overcome it, scientists are working on the development of systems that simulate and reproduce functions of tissues and organs in conditions very similar to reality. They are called organ-on-a-chip, which include microenvironments and microarchitectures that simulate the state of tissues and living organs.

Scientists of NANBIOSIS Unit 8 have published in an article, cover of the magazine “Lab on a Chip”, the “proof of concept” of a microfluidic device that reproduces the blood-retinal barrier, that is, a microchip that allows us to reproduce what happens ” in vivo ‘in the retina. This device can be an essential tool that revolutionizes experimentation ‘in vitro’.

José Yeste, researcher of the CIBER-BBN, explains that the micro device consists of several parallel compartments, in which different types of cells have been cultivated to emulate the structure of cellular layers of the retina. They are endothelial cells, that is, they form the internal part of the barrier, in contact with the blood capillaries, through which oxygen and nutrients reach the retina. In addition, it is also composed of neuronal cells (which form the neuroretina), and pigment epithelial cells, which constitute the outer layer. The compartments are interconnected in their lower part by a network of micro-grooves, so as to allow an intercellular communication through the exchange of signalling molecules between cells. Thus, cells can send their signals to others and interact, much like they would in a living organism. In addition, the micro device allows the endothelial cells to be subjected to the mechanical stimulus induced by the flow to emulate a more physiological microenvironment.

“Within the body, the endothelial cells that line the inside of blood vessels are subject to the mechanical stimulation of blood circulation. In cell cultures that do not reproduce this flow, the cells are as ‘lethargic’, and do not respond in the same way they would in real conditions, “explains Rosa Villa, Scientific Director of NANBIOSIS Unit 8 and leader of the group of Biomedical Applications of the Microelectronics Institute of Barcelona of the CSIC.

Scientists have evaluated the correct formation of the blood-retinal barrier by performing permeability, electrical resistance tests, as well as protein expression of tight junctions between cells. These tests were intended to verify that the barrier is well formed, that it has closed but maintains the natural permeability, sufficient to allow the passage of nutrients and oxygen, and that the cells are in contact and interact with each other.

This work has been developed in the ICTS NANBIOSIS, more specifically in Unit 8 of Micro-Nano Technology located in the IMB-CNM. It is also part of the results of the CIBER intramural project called Micro BRB: Microfluidic model of retinal neurovascular unit to identify new therapeutic targets in diabetic retinopathy (2016-2017) in wich also  participates Unit 3 of NANBIOSIS 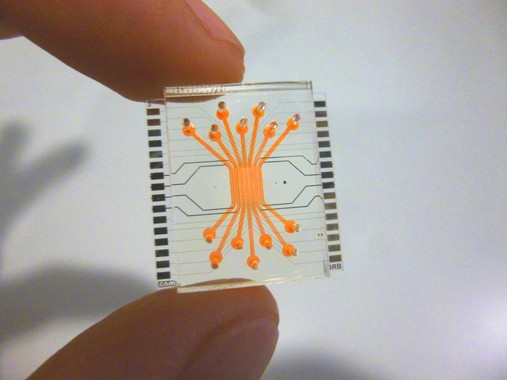