You are here : Home / News / Researchers of two NANBIOSIS units success in the Third Millennium Awards 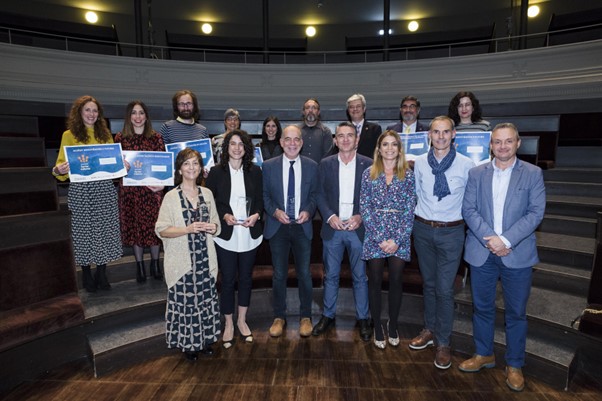 Researchers of two NANBIOSIS units success in the Third Millennium Awards: the Young Research Talent award to Julia Ramirez (NANBIOSIS U27) and the Research and Future Award to the NFP group (NANBIOSIS U9)

Last November 8, four initiatives received the highest award in the eighth edition of the HERALDO contest Third Millennium Awards which represent the recognition of the Aragonese community from the youngest to the most consolidated trajectories in knowledge transfer, innovation, and scientific dissemination.

The Paraninfo of the University of Zaragoza hosted this event in which researchers CIBER-BBN – NANBIOSIS were recognised this year:

The Films and Nanostructured Particles (NFP) group of INMA and CIBER-BBN, directed by Jesús Santamaría and coordinating NANBIOSIS U9 “Synthesis of Nanoparticles Unit“, was recognised with the Research and Future Award: Manufacturing drugs inside tumors.

Julia Ramírez, from the BSiCoS group of the I3A and CIBER-BBN, coordinator of unit 27 “High Performance Computing Unit” of NANBIOSIS, received the “Young Research Talent” award for her work in the biomedical signal processing.

The Third Millennium Awards’ objective is to recognize the work of people, research centers and groups, institutions and companies in Aragon in three main axes:

– Transfer of Science and University to Business Award

During her doctorate at Unizar (2017), she developed a methodology to quantify morphological variations in the electrocardiogram (ECG). This quantification led to the T-wave morphology restoration (TMR) index, which was shown to be a stronger predictor of sudden cardiac death than standard clinical indices.

After her doctorate, she moved to work at Queen Mary University of London (QMUL) in London. This was a key point in her research career because she broadened her knowledge in engineering, gaining experience in genetics and bioinformatics. During those years, she obtained two highly competitive European Postdoctoral Fellowships: a WHRI-Academy Cofund (2017) and a Marie Skłodowska-Curie (2018). In recognition of her work, in April 2020, QMUL promoted her to Lecturer in Genetics and Cardiovascular Data Science.

Since January of this year, Julia Ramírez has been back in Zaragoza thanks to a María Zambrano International Talent Attraction Scholarship, giving up the highly competitive Category 2 Talent Attraction of the Community of Madrid, which she had also been awarded. In total, the researcher from Zaragoza has contributed to her field of research with 32 peer-reviewed publications in different disciplines, including bioengineering, cardiology and genetics (13 of her as first author).

In her speech recognized “being in a happy moment”, for being back in Zaragoza, “being away is not always easy” and also for collecting an award for her work that always motivates her to continue forward in a career as the researcher, long and complicated.

«This initiative is the work of many people. It has been a fantastic trip”, said Jesús Santamaría, Principal researcher of the NFP Group

The NFP of the Group was created in 2007 by researchers from different backgrounds, with the aim of concentrating efforts in the development and application of nanostructured materials with an emphasis on nanoparticles, nanoporous interfaces and hybrid systems. Its members have made pioneering developments in the synthesis of nanomaterials and their application in fields ranging from medicine to energy and the environment.

The award recognised the group’s work in the cancer research throughout the project CADENCE (Catalytic Dual-Function Devices Against Cancer), that aims to find a new way to fight this disease, avoiding the problems associated with conventional chemotherapy and its devastating side effects. Three fundamental problems had to be solved. First, developing suitable catalysts (catalytic nanoparticles) capable of operating inside a tumour and manufacturing toxic molecules there. Alternatively, nanoparticles can operate in other ways (by heating remotely) and also produce tumour death. It is also necessary to selectively deliver these catalysts to the tumour, avoiding their accumulation in other organs. Finally, these catalysts must be selectively activated inside the tumour. The answers obtained to each of these problems have opened new paths in the fight against cancer: Catalysts capable of manufacturing toxic substances from within the tumour are used, minimising their diffusion through the body.

This research was funded for five years through an ERC Advanced Grant project endowed with 2.5 million euros. The ERC Advanced Grants are the most prestigious European projects, awarded by the European Research Council in a highly competitive international competition.